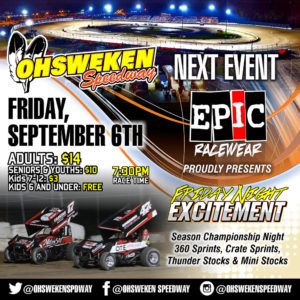 OHSWEKEN, Ont. (September 5, 2019) – With four month of action in the books, it all comes down to one final night. Ohsweken Speedway will wrap up its 2019 Friday Night Excitement campaign with Epic Racewear Championship Night on Friday, September 6. The championships will be decided on the final points night of the 2019 season in all four Ohsweken weekly divisions, including the Kool Kidz-Corr/Pak 360 Sprint Cars, Strickland’s Brantford Chevrolet Crate Sprint Cars, Middleport Mechanical Thunder Stocks and HRW Automotive Mini Stocks.

In addition, the race will be simulcast live on BOTH Ohsweken’s livestream network beginning at 7:30pm ET and MAVTV Canada’s All North Racing powered by Pinty’s beginning at 9:30pm ET.

The final pre-race Autograph Session and Racer’s Marketplace of the season will take place from 5:30pm to 6:30pm behind the main grandstands. Fans will have the opportunity to purchase driver merchandise and get autographs from their favourite drivers. Admission to the autograph session is free with the purchase of general admission.

Championship Night is also the final opportunity for fans to redeem general admission tickets purchased in support of Kids Race for the Canadian National Autism Foundation night that was originally scheduled for August 16.

Entering the final week of action, the Kool Kidz-Corr/Pak 360 Sprint Car title is far from decided. With 13 races in the books, reigning and defending champion Dylan Westbrook leads Mack DeMan by just two points. Westbrook is looking for his third 360 track title while DeMan is seeking his first in just his second season of 360 competition. Sitting third in the standings, and still mathematically alive in the championship chase is Tillsonburg’s Cory Turner who is 30 points back of the lead. Fenwick’s Jim Huppunen sits fourth in the standings while Mitch Brown is just six points back of Huppunen to complete the top-five. Rounding out the top-10 are Ryan Turner, Scott Kreutter, Holly Porter, rookie Josh Hansen and Shane Ross.

The Strickland’s Brantford Chevrolet Crate Sprint Car title is still a three horse race. Mount Brydges, Ont. native and rookie driver Nick Sheridan leads the way entering the final night of action. His advantage is just 12 points over local driver Lucas Smith of Brantford. Sheridan’s three wins and nine top-fives in 12 starts have propelled him to the top of the standings and given him a shot at the track title. Meanwhile, Smith has been ultra consistent as well with a win and nine top-10 finishes. The third driver with a realistic shot at the title is St. Thomas, Ont. driver Jesse Costa, who has three wins to his credit as well. Costa has said he’s hoping for a wide and slick track to make his run at the championship. Regardless of who claims the title, it will be the sixth different champion in the six seasons the Crate Sprint Car division has competed at Ohsweken.

Fonthill’s Steven Beckett comes into the night 45 points back of the lead and is 24 points ahead of fifth-place DJ Christie. Paul Klager, Dereck Lemyre, Jacob Dykstra, Liam Martin and Brad Herron round out the top-10.

The Middleport Mechanical Thunder Stock title is the only division where the trophy is all but engraved. Provided he starts his heat race, Hagersville native Dave Bailey will claim his fifth straight Thunder Stock championship at Ohsweken. Bailey comes into the night with a 66-point advantage over Trevor DeBoer. Logan Shwedyk, Ryan Beagle and Ryan Dinning round out the top-five, with the three drivers separated by a total of 37 points. Jim Lampman, Donny Lampman, Ken Sargent, Mark Fawcett and Christopher Hale hold top-10 spots with one race remaining.

Once again, the HRW Automotive Mini Stock division has the tightest point battle coming into the night. Kyle Wert of Ancaster and Dusty DeBoer of Hagersville come into the night tied for the lead with 937 points each. Seemingly, it will be a mano-a-mano finish to the year, but Waterdown’s Tristan Da Silva also remains in the mix with only a 19-point gap to overcome. With one of the three drivers set to become champion, the Mini Stock division will have its fourth different titlist in the last five years. Tim DeBoer and Ryan Hillar round out the top-five while last week’s winner Wayde Thorne sits sixth. Jonathan Ayrton, Mike Sarantakos, Kevin Thorne and Cole Hardy complete the top-10.

About EPIC Racewear: Based in Hanover, Ontario, EPIC Racewear is the official Racewear of Ohsweken Speedway. EPIC is a company fueled by the passion of racing, where the customer is treated as everyone would like to be treated – fairly and honestly. Brothers Dan and Bob Bailey founded EPIC in 2014, and have exploded into the racing community.  Family ties, friendships, and a 40 year old family business have paved the way for instant trust. Quality customer service throughout the ordering process, and post-sale follow up to ensure client satisfaction create word-of-mouth advertising, and ensures repeat customers. EPIC is proud to offer individual custom designs, most of which are included with a racewear purchase. EPIC strives to avoid minimums, setup fees, and other supplemental charges whenever possible. Looking for swag, t-shirts, hats, or flags?  No problem. Drop EPIC a line for a straight talk, straight answer quote today! Visit them at www.epicracewear.ca, e-mail them at info@epicracewear.ca or call them at 519 374-9900. Look – Feel – Be – EPIC.