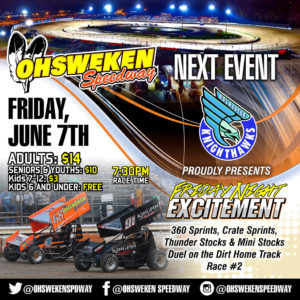 OHSWEKEN, Ont. (June 5, 2019) – On the heels of last week’s MavTV Canada debut on All North Racing powered by Pinty’s, Ohsweken Speedway will return to action for Friday Night Excitement presented by the Rochester Knighthawks Lacrosse Club on June 7. All four Ohsweken weekly divisions will be in action, including the Kool Kidz-Corr/Pak 360 Sprint Cars, Strickland’s GMC Crate Sprint Cars and Middleport Mechanical Thunder Stocks while the HRW Automotive Mini Stocks battle in the second home track race for the Insta-Panels Duel on the Dirt Series.

Race time for Rochester Knighthawks night is 7:30pm. The pit gates open at 5:00pm before the main grandstand opens at 6:00pm. For the full schedule of Ohsweken Speedway events, visit www.ohswekenspeedway.ca.

Two weeks, two wins for Dylan Westbrook. The Scotland, Ont. driver of the Hill’s Racing No.47x is perfect so far this season in Kool Kidz-Corr/Pak 360 Sprint Car competition after stealing a win from Scott Kreutter late in last Friday’s event. Through two races, sophomore pilot Mack DeMan of Mississauga, Ont. is second in the championship standings, 14 points back of Westbrook after recording a pair of third-place finishes to start the year. With a pair of fourth-place tallies, Fenwick, Ont, drive Jim Huppunen is currently third in the standings, just four markers back of DeMan. Cory Turner sits fourth in the standings with a pair of top-10 finishes to his credit, including a top-five on opening night. Rounding out the top-five in the standings is Brantford driver Mitch Brown who has also notched a pair of top-10s to start the year.

It may have only been two races, but Binbrook’s Liam Martin has been the class of the Strickland’s GMC Crate Sprint Car field. The teenager leads the points standings after rattling off an opening night win before driving from 18th to finish second in week two. Beamsville’s Paul Klager currently sits second in the standings with a top-five to his credit and sits 18 points back of Martin. DJ Christie of Beachville currently occupies third, four points back of Klager. Currently fourth is Fonthill’s Steven Beckett, who is just six points back of second. Lucas Smith is fifth in the standings on the strength of a pair of top-10 finishes to start the 2019 campaign.

A pair of Hagersville natives sit at the top of the Middleport Mechanical Thunder Stock standings after winning the first two races. Defending champion Dave Bailey leads following an opening night win and a second-place result last Friday. Trevor DeBoer scored the win and now has a victory to go with his opening night top-10. He sits tied for second with Jerseyville’s Logan Shwedyk who has a pair of top-fives this season. Guelph, Ont. driver Chris Hale and Harley, Ont. pilot Rob Hoskins are tied for fourth, 22 points back of Bailey for the championship lead.

The HRW Automotive Mini Stocks will run their second home track race for the Insta-Panels Duel on the Dirt Series. Sean Iftody leads the championship standings after an opening night win and a third-place finish last week to open a 17-point lead over Nick Masi. So far, Masi has a fifth- and sixth-place finishes to his credit, with an incredible run from 32nd to fifth last Friday night. Tim DeBoer and Waterdown’s Tristan Da Silva are tied for third, just four points back of Masi for second. Rounding out the top-five is Jonathan Ayrton who has a top-five and a top-10 so far rounds out the top-five, just two points back of the two drivers tied for third.