The 2017 Canadian Sprint Car Nationals field assembled five-wide prior to the start of the 35-lap A-Feature. (Photo by Dale Calnan/Image Factor Media). 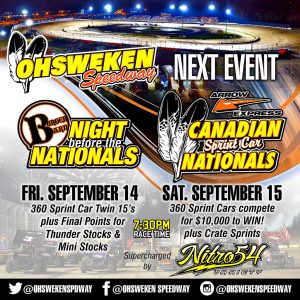 OHSWEKEN, Ont. (September 12, 2018) – Ohsweken Speedway is set for it’s biggest weekend of the season and the most lucrative 360 Sprint Car race in the Northeast with the $10,000 USD-to-win and $1,000 USD-to-start 14th annual Arrow Express Canadian Sprint Car Nationals presented by Nitro 54 Variety on Saturday, September 15 and Burger Barn Night Before the Nationals on Friday, September 14. The weekend will feature the top 360 Sprint Car racers in the Northeast and from across North America along with Ohsweken’s top weekly racers.

All four of Ohsweken’s weekly Friday Night Excitement racing divisions will be on display to the large crowd at some point over the two-day event. The weekend is headlined by the Kool Kidz-Corr/Pak 360 Sprint Cars and will also feature the Strickland’s GMC Crate Sprint Cars, Middleport Mechanical Thunder Stocks and HRW Automotive Mini Stocks on one of the two days.

Race time is 7:30pm each night. Reserved adult grandstand admission is $20 for the Burger Barn Night Before the Nationals on Friday, September 14 and children 12 and under are $5 or less. Reserved adult grandstand admission is $40 for the 14th annual Arrow Express Canadian Sprint Car Nationals presented by Nitro 54 Variety and $15 for children 12 and under. Reserved tickets can be purchased online in advance at www.ohswekenspeedway.ticketforce.com. For additional event information, visit www.ohswekenspeedway.ca.

The Strickland’s GMC Crate Sprint Cars will also be in action on Saturday, September 15 at the 14th annual Arrow Express Canadian Sprint Car Nationals with their own $1,000-to-win Nitro 54 Variety Crate Showdown. Drivers will also be racing for $750 for second, $500 for third, $400 for fourth and $300 for fifth and a minimum of $100 to start the A-Feature. The ultra-talented division of Crate Sprint Car drivers will have their opportunity to shine on one of Sprint Car Racing’s biggest stages. The 2018 division champion Shone Evans will be competing in 360 Sprint Car portion of the Nationals as will fellow competitors Holly Porter and Jacob Dykstra, but division mainstays Aaron Turkey, Hannah Ferrell, Lucas Smith, Dereck Lemyre, Caleb Wood, Paul Klager, and the most recent first-time winner, Josh Hansen, are all among the drivers expected to be in action and competing for a cool $1,000 winner’s prize.

Burger Barn Night Before the Nationals

The Kool Kidz-Corr/Pak 360 Sprint Cars will also be in action on Friday, September 14 as well with drivers competing for one of two guaranteed starting spots in Saturday’s $10,000 USD-to-win A-Feature. Friday’s format often Features plenty of thrilling action as drivers are forced to qualify into one of the twin 15-lap and $500-to-win Features via their heat race, with only 15 cars qualifying for each race. The winner of each 15-lap Feature race will earn a guaranteed starting spot in the fifth row (9th and 10th) in Saturday’s 35-lap A-Feature.

Also scheduled for Friday’s program is the rain-postponed Patriot Sprint Tour A-Feature from Friday, July 20. That event already has 26 driver locked into a 25-lap event paying $3,333 to the winner. Matt Bilings of Brockville, Ontario is scheduled to start on the pole along with ASCS National tour competitor Alex Hill of Six Nations, Ontario. Scott Kreutter, Chuck Hebing and Mark Smith are also scheduled to start inside the top-five.

The Middleport Mechanical Thunder Stocks will battle it out in their final 20-lap Feature of the season during the Burger Barn Night Before the Nationals. Dave Bailey has clinched his fourth straight championship in the division entering the race with an 86-point gap over second-place Logan Shwedyk. The rest of the top-five is far from solidified though as Shwedyk enters only 13 points ahead of Ken Sargent for second while Trevor DeBoer is just 17 points back in fourth. Christopher Hale, who has won the last three Feature race is fifth, 26 points back of Shwedyk for second. Completing the top-10 in the standings are Ryan Beagle, Jim Lampman, Billy Bleich Jr., Mark Bazuin, and Blake Bomberry Jr.

The HRW Automotive Mini Stock championship will come down to the final 15-lap Feature of the season. Entering the final race of the season, Matt Nuell is just 10 points ahead of Gillian Hils for the championship title. Sean Iftody also remains in championship contention with a 30-point gap back of Nuell. Dusty DeBoer and Jonathan Ayrton round out the top-five entering Friday’s finale. Mike Sarantakos, Time DeBoer, Kyle Wert, Martin Schroeder and Tristan Da Silva round out the top-10 prior to this week’s action.

14TH ANNUAL CSCN ENTRY INFO
Entries continue to be accepted for the 2018 Canadian Sprint Car Nationals. Teams are encouraged to save time by submitting entry information online at the following link: http://ohswekenspeedway.ca/cscn-competitors-info/canadian-sprint-car-nationals-entry-form/