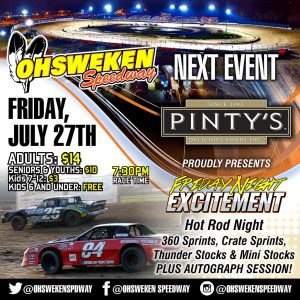 OHSWEKEN, Ont. (July 23, 2018) – After rain forced the cancellation of Feature racing last Friday night, Ohsweken Speedway is eager to return to action this week with Pinty’s Delicious Foods Hot Rod Night on July 27. Fans who cruise to the track in their classic cars will receive a coupon for half price adult admission at the driveway entrance when they arrive during Hot Rod Happy Hour between 6:00pm and 7:30pm.

Last week’s rained out Autograph night has also been added to this week’s program to allow fans to meet their favourite drivers on track at intermission.

On the track, the Kool Kidz-Corr/Pak 360 Sprint Cars will headline the action as they look to get back to weekly competition. In addition, all three of Ohsweken’s other weekly divisions will also be in action, including the Strickland’s GMC Crate Sprint Cars, Middleport Mechanical Thunder Stocks and the HRW Automotive Mini Stocks.

During last Friday’s Jibs Action Sports Autograph night, racing was postponed when rain washed-out the track just prior to Feature action. Preliminary and qualifying action was complete for all divisions, except for the Strickland’s GMC Crate Sprint Cars, which were on track for their B-Main with three laps completed when the rain began to fall heavily. Autograph night was also postponed and will now take place this Friday, July 27.

Ohsweken and Patriot Sprint Tour officials immediately agreed the 25-lap and $3,333-to-win Patriot Sprint Tour versus Kool Kidz-Corr/Pak 360 Sprint Car Feature would be completed on Friday, September 14 as part of the Burger Barn Night Before the Canadian Sprint Car Nationals. Matt Billings and Alex Hill are scheduled to start on the front row. This race will no longer count for Kool Kidz-Corr/Pak 360 Sprint Car season points as the final point night is scheduled as September 7.

Ohsweken officials have now also confirmed the remaining make-up dates. The Strickland’s GMC Crate Sprint Cars will complete their program, including the B-Main, on August 10. The Middleport Mechanical Thunder Stocks will run their 20-lap Feature this Friday, July 27. The HRW Automotive Mini Stocks will run their 15-lap Feature on August 3. On each night, those divisions will also have a full race program that will be run following the completion of the postponed Feature race.

In addition, the Race of Champions Sportsman tour race that was rained out on June 22 has a confirmed rescheduled date of Friday, August 24.

After last Friday’s Feature was rained out, the point standings remain unchanged entering the final race of July. Dylan Westbrook holds a 61-point advantage over Cory Turner after claiming his sixth Ohsweken win of the season two Fridays ago. Jim Huppunen is locked into third spot, 18 points behind Turner while Mack DeMan has moved into fourth and trails Huppunen by just two points. Tyler Hendricks rounds out the top-five and sits just three points behind DeMan and is five back of Huppunen. Rounding out the top-10 are Ryan Turner, Steve Lyons, Chris Steele, Mike Thorne and Shawn Sliter.

St. Thomas, Ont. driver Jesse Costa continues to lead the Strickland’s GMC Crate Sprint Car standings and now holds a 35-point advantage over Shone Evans. In third is the reigning division champion Holly Porter, 11 points back of Evans. Lucas Smith fell to fourth in the standings after his first DNF of the season two weeks ago and is now nine points back of Porter. Hannah Ferrell holds down the fifth and final top-five position. Completing the top-10 are Aaron Turkey, Jacob Dykstra, Jerry Hill, Brad Herron and Dereck Lemyre.

The Middleport Mechanical Thunder Stock division continues to have a tight battle at the top of the standings. After his second place finish last race, Dave Bailey has retaken control of the top spot and now holds a lead of just nine points over Ken Sargent. Logan Shwedyk fell to third in the standings with a 12th-place finish last week, but remains within striking distance of the lead at 17 points back. Jim Lampman currently holds down fourth, but is just two points ahead of fifth-place Billy Bleich Jr. entering this week’s action. Trevor DeBoer, Christopher Hale, Mark Bazuin, Ryan Beagle and Rob Hoskins complete the top-10.

The HRW Automotive Mini Stocks have the closest of the four points battles as Ohsweken races into the final week of July. Gillian Hils and Nick Masi now sit tied for the division lead at 573 points apiece. Also in the mix is third-place Sean Iftody, just 10 points behind and the division’s most recent winner Dusty DeBoer, who currently sits fourth and just 16 points off the lead. Matt Nuell rounds out the current top-five and is 32-points back of the lead. Kyle Wert, Jonathan Ayrton, Tim DeBoer, Dale Millard and Tristan Da Silva complete the top-10.

About Pinty’s Delicious Foods: The tradition of premium poultry products with the Pinty’s name attached goes back over 70 years to when Ed Pintwala first opened Pinty’s Poultry Limited in 1943. Now based in Burlington, Ontario, Pinty’s produces a full line of products available at many of your favourite retailers, and at Ohsweken Speedway’s Pit Stop concession stands! Call them at 1 800-263-7223, or visit www.Pintys.com for more information.