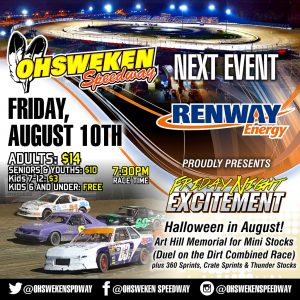 OHSWEKEN, Ont. (August 7, 2018) – Ohsweken Speedway will continue the month of August as Renway Energy presents the longest race of the year for the HRW Automotive Mini Stocks, the 42-lap Art Hill Memorial, and Halloween in August on Friday, August 10. All junior fans who arrive in costume at the racetrack will receive free kids grandstand admission for the night.

The longest and richest race of the season for the HRW Automotive Mini Stocks is the 42-lap and $1000-to-win Art Hill Memorial. This year’s race is also the final combined race for the inaugural Insta-Panels Mini Stock Duel on the Dirt Series, which is a multi-race mini-series between the drivers of Humberstone, Merrittville and Ohsweken speedways. With Ohsweken’s weekly Mini Stock car count regularly topping 40 cars, officials are expecting nearly 50 cars this week as the top drivers from Merrittville and Humberstone vie for the Duel on the Dirt title.

The annual race is run in honour of the late Art Hill, who raced his No.42 machine at Ohsweken in the early years at the track. Past Art Hill Memorial winners include well-known Ohsweken names such as Rick Emberson, Lee Winger, Robbie Rounce, Marc Hallett, Dave Bailey, Mitch Brown, Trevor Goulding, and Karl Sault, and Wall of Fame inductee Abel Castelein. Jake Bazuin ended his brother Mark’s winning streak in the event when he won the 2016 edition. Nick Masi is the defending winner of the event after scoring the 2017 victory during his rookie season.

Entering this year’s race, Gillian Hils is the current HRW Automotive Mini Stock point leader with Masi in second, 29 points back of the lead. Matt Nuell, Sean Iftody and Jonathan Ayrton round out the current top-five.

The Kool Kidz-Corr/Pak 360 Sprint Cars return to action this week after a week off from competition to allow drivers to compete at the Knoxville 360 Nationals. The 360 drivers have not run a Feature at Ohsweken since July 13 after rain washed out their Feature events on July 20 and July 27 before taking the week off on August 3.

Entering this week’s action, Dylan Westbrook remains the current point leader with a 61-point advantage over Cory Turner. The ‘Red Rocket’ Jim Huppunen is third, 18 points back of Turner while Mack DeMan trails Huppunen by just two points. Tyler Hendricks is fifth, only five points back of Huppunen for third.

A big week is on the card for the Strickland’s GMC Crate Sprint Cars as they make-up their rain-postponed July 20 Feature. That will be their first Feature of the night before they jump into the regularly scheduled event. Entering this week’s doubleheader, Jesse Costa remains the division point leader, but by just 14 points over Shone Evans. Holly Porter sits in third, just four points back of Evans and trailing Costa by just 18 for the lead. Sprint Car rookie Lucas Smith, who has a win to his credit in his rookie season, is fourth in the standings, while Hannah Ferrell rounds out the top-five.

Dave Bailey has forged a comfortable lead at the top of the Middleport Mechanical Thunder Stock standings with a 41-point gap over Logan Shwedyk. Ken Sargent sits third, 18 points back of Shwedyk, while Trevor DeBoer sits fourth. Sitting fifth is Christopher Hale, who is fresh off his first career win last Friday night and trails DeBoer by a single point for fourth and Sargent by only five for third.