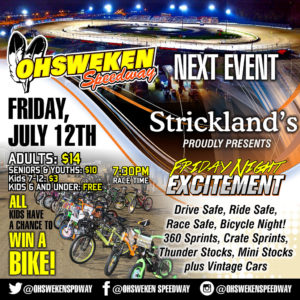 OHSWEKEN, Ont. (July 10, 2019) – Following a rainy finish to Ohsweken Speedway’s July kick off, the Six Nations oval is gearing up for a busy night of action on Friday, July 12 as Strickland’s Brantford Chevrolet presents Kids Bike Night. The popular kids bike night will see all kids who enter the main grandstands receive a free draw ticket to win one of several bikes donated by Strickland’s Brantford Chevrolet.

The Vintage Cars make their return to Ohsweken Speedway for their only visit of the year. All four Ohsweken weekly divisions will also be in action, including the Kool Kidz-Corr/Pak 360 Sprint Cars, Strickland’s GMC Crate Sprint Cars, Middleport Mechanical Thunder Stocks and HRW Automotive Mini Stocks. The HRW Automotive Mini Stocks will run double features as they make-up their event from July 5 that was postponed due to rain late in the evening.

Through seven races, the points battle in the Kool Kidz-Corr/Pak 360 Sprint Car division is a nail biter, to say the least. On the strength of a win and seven consecutive top-10 finishes, Fenwick, Ont. pilot Jim Huppunen leads the championship standings. His lead, however, is just two markers over Scotland, Ont. wheelman Dylan Westbrook, who has claimed three wins, but suffered one DNF three weeks ago that slowed his championship pace.

Just two points behind Westbrook, and only four points off the lead, is the ‘Highlight Man’ Mack DeMan. The Mississauga, Ont. native has lived up to his name so far this year. After crashing out of the feature two weeks ago, DeMan responded to adversity last week and drove from 21st to a fifth-place finish in the main event. Tilsonburg, Ont. native Cory Turner occupies fourth in the standings, 20 points back off the lead and like Huppunen, has registered seven top-10 finishes to begin the campaign. In fifth is his brother, Ryan Turner, who has also managed to be in the top-10 each night he has unloaded the No.91. Rounding out the top-10 are Mitch Brown, Scott Kreutter, Holly Porter, Josh Hansen and Shane Ross.

The Strickland’s Brantford Chevrolet Crate Sprint Cars also have a tight race at the top of the standings with two drivers emerging in a heated battle up front. Brantford’s Lucas Smith is enjoying a successful sophomore season and leads the standings by two points over Fonthill driver Steven Beckett. Smith’s win on June 21 is the difference maker so far as Beckett has recorded one more top-10 finish than Smith thus far. Jesse Costa sits third in the standings, 19 points back of the lead. Teenage rookie Nick Sheridan currently sits fourth, 15 points back of Costa and Paul Klager, who notched his first career Sprint Car win on June 28, is fifth in the standings and trails the aforementioned Sheridan by just four points.

Dave Bailey has taken a commanding lead atop the Middleport Mechanical Standings. Through seven events, the defending champion out of Hagersville, Ont. has three wins and has not finished outside the top-five in seven starts and has opened a 53-point lead. In second is Trevor DeBoer of Hagersville, Ont. who has two wins and seven top-10 finishes, including three top-five tallies. Caistor Centre’s Jim Lampman is 27 points back of DeBoer and holds a nine-point advantage over Vittoria’s Ryan Beagle who occupies fourth with a win to his credit. One point back of Beagle is Jerseyville’s Logan Shwedyk, who rounds out the top-five.

The HRW Automotive Mini Stocks once again have double features on the schedule. Last week, they completed their Feature from June 28 before the regularly scheduled event, which was last on the program, was washed out. The July 5 feature, which already had a lineup set, will be the first race of the nice and will see Trevor Want and Jeremy May pace the field to the green flag from the front row.

Kyle Wert leads the HRW Automotive Mini Stock championship standings with a 29-point gap over York’s Tim DeBoer. Dusty DeBoer is currently third, 17 points back of Tim, but holds just a three-point advantage over fourth-place Tristan Da Silva. Rounding out the current top-five is Waterford’s Wayde Thorne, who is 63 points back of the lead but trails Da Silve by only 14 markers.

About Strickland’s Brantford Chevrolet: Strickland’s is a family owned and operated business that has been serving Southwestern Ontario for over 30 years. They have never been afraid to change in order to better serve their customers, but one thing has remained the same – they have always run their company based on the old proverb “Treat others the way you wish to be treated”. Strickland’s is the only full-line General Motors dealer in Brantford and the surrounding area, serving the community for over 90 years. Strickland’s returned as the title sponsor of the Crate Sprint Car division for a third consecutive season in 2016. Strickland’s GMC is located at 19-21 Lynden Road in Brantford, at the intersection of Lynden Road and Wayne Gretzky Parkway, and just 15 minutes from Ohsweken Speedway. Visit Strickland’s Brantford Chevrolet online at www.Stricklands.com or call them at 1-800-599-5558.