By Tommy Goudge (May 25, 2015) – Our series of interviews for the 2015 season continues with sophomore Crate Sprint Car driver Jake Brown, who spoke with us during the week before Opening Night. A graduate of the Mini Stock and Thunder Stock divisions, and younger brother of 360 Sprint Car driver Mitch Brown, Jake won two features during his rookie season in the Crate Sprint Car division, and finished third in the championship standings. 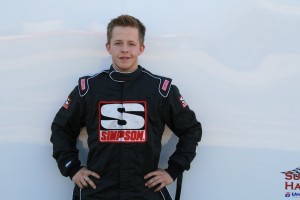 JB: Not much comes to mind, other than go fast, be smooth and, most of all, be consistent every lap around.

JB: (It) was when my brother first started out racing Mini Stocks, and all I could remember was the roar of the motors, and how I loved it.

JB: I would love to just keep doing Sprint Car racing, only on a larger scale – hopefully racing 10 or 11 months of the year. Nothing else compares to Sprint Car racing and the passion people have for it, especially in such states as Pennsylvania, Ohio, or Indiana.

JB: I really have no complaints. I love everything about dirt track racing.

JB: I think that younger generations really have to see racing first hand to see how fast we go – to see the battles that take place on the track that get fans on the edges of their seats, and keep them either coming back to watch or compete in racing themselves.

JB: I wouldn’t say I enjoy competing against one particular driver – I’m just competing trying to catch whoever is in front of me.

JB: I would say always look at the positives, whether it’s making a top ten finish, setting the car up different to make it handle better, etc…Just always be positive because you get nowhere in life being negative. Strive to be better every time you’re on the track, and success will come.

JB: I never really got an autograph from anyone who was a big deal to me growing up. I just always looked up to my Grandpa Harold and the way he lived his life, worked, and raced.

JB: I’d tell them to look up to whoever is a hard worker, and is a positive, humble person.

TG: I’m asking each person to give me a question for the next interview. Mark Bazuin asks “Who do you think is an up and coming driver to watch for?”

JB: Dylan Westbrook in the #47x (crate sprint) car. He is a smart kid who picks up what the track is doing.

JB: Who is your biggest idol in life?