By Tommy Goudge (May 21, 2015) – Our series of interviews for the 2015 season continues with sophomore Mini Stock driver Mark Bazuin, who spoke with us during the week before Opening Night. A graduate of the Bomber division, won four Mini Stock features – including the Art Hill Memorial 42 – during the 2014 season on his way to winning the Rookie of the Year award, and a runner-up finish in the championship standings. 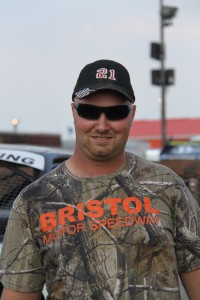 MB: I have a mental checklist I usually go over in my head. Last year – being a contender for the Championship – I just tried to relax and stay focused on winning races.

MB: I started out when I was about 12 years old helping out my neighbours Ron and Joe Rienties. They both raced cars at Flamboro, and came to Ohsweken a few times a year. They probably don’t know how much I appreciate them taking the time to teach me the ropes, but they are a huge part of why I race today. Another person that has helped me along the way is Scott McPhail. I have been friends with Scott for several years, and I used to help him out with his car. Now that I have one of my own, I often go to him for advice.

MB: It was one of the first tracks I ever went to as a kid, and I knew immediately it was something I wanted to try one day.

TG: How did your driving career begin, and what was your first race car?

MB: Joe Rienties let me take his Chevelle out in the Outlaw Thunder Car special at Ohsweken when I was 16. Although I didn’t do very well and almost rolled the car, I was hooked. After that I helped friends in the pits for the next several years until 2012, when I built my first Bomber – a 1988 Fiero GT which I won a feature race with.

TG: The Bomber division doesn’t always get a lot of attention, but quite a few drivers have moved to other divisions from the Bombers, and won races and even championships. What makes it a good place to start?

MB: The Bombers are an affordable way to get into racing, and will teach you some of the basics on what is involved with maintaining a car.

MB: I would love to race NASCAR one day…but realistically, I would be happy just moving up to Thunder Stocks here at Ohsweken.

MB: All the Thunder Stock drivers put on an amazing show, but if I have to single out one driver, I always love watching Lee Winger drive from the back of the pack.

MB: I’m not sure there is anything I would change. The rules package at the “Big O” is the best in Ontario.

MB: Have an understanding wife. Racing can be a full time job!

TG: I’m asking each person to give me a question for the next interview. Dusty DeBoer asks: “If you had to sit out a race for some reason and needed one of the Ohsweken Speedway competitors to drive your car, who would you draft into your seat?”

MB: I’d have to say Glenn Styres, just because I’d love to see him in a Mini Stock.

MB: Who do you think is an up and coming driver to watch for?