The Race of Champions Sportsman tour marks the only stop for Sportsman racing at Ohsweken in 2018. (Photo by Dale Calnan/Image Factor Media). 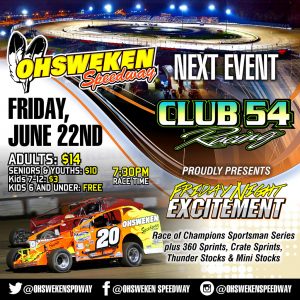 OHSWEKEN, Ont. (June 20, 2018) – Ohsweken Speedway will return to action on Friday, June 22 as Club 54 Racing presents the Race of Champions (RoC) Sportsman Tour and a full card of racing featuring all four weekly divisions as well. The RoC tour’s third annual stop at Ohsweken marks the only date for Sportsman racing at the track in 2018.

Ohsweken returns to its roots this Friday with the return of Sportsman racing as the Race of Champions sportsman tour kicks off its five-race 2018 schedule at the Big ‘O’. Chad Chevalier has won each of the first two RoC visits to Ohsweken in 2016 and 2017. Brad Rouse scored a DIRTcar Series victory at Ohsweken last season and a Shootout victory in 2013. Jay Mallory (pictured above), the all-time winningest Sportsman driver in Ohsweken history with 29 last won in June 2015 and will look to earn his 30th victory on Friday night.

After last Friday night’s win, Jesse Costa extended his point lead in the Strickland’s GMC Crate Sprint Car division to 19 over rookie Lucas Smith. Costa has had an exemplary start to the season and is also the point leader on the Action Sprint Tour powered by RaceRivalz.com. Shone Evans currently sits third, 31 points off the lead while Holly Porter sits fourth and Hannah Ferrel holds down the fifth spot. Aaron Turkey, Jerry Hill, Rob Neely, Steven Beckett and Dereck Lemyre sit in spots six through 10 after five races.

Dave Bailey’s third win of the season saw him extend his point lead in the Middleport Mechanical Thunder Stock division to 13 points over Ken Sargent, who has been the model for consistency so far this season with five straight top-10 finishes. Logan Shwedyk, also a winner this season, sits in third only one point behind Sargent and has just one more point than Jim Lampman in fourth. Ryan Beagle and Trevor DeBoer sit deadlocked for fifth at 342 points, which is 29 back of Bailey. Billy Bleich Jr., Mark Bazuin, Christopher Hale and Brian Teelple round out the top-10.

Nick Masi has taken commanding control of the top spot in the HRW Automotive Mini Stock division on the strength of his third win this season last Friday night. His advantage is now 37 points over Sean Iftody and 43 over third-place Dusty DeBoer. Gillian Hils sits in fourth-place, 10 points back of DeBoer, but just three ahead of fifth-place Jonathan Ayrton. Matt Nuell, Martin Schroeder, Dale Millard, Brian Crosgrove and Mike Sarantakos are holding positions six through 10 with five races complete.

Can’t make it to the track or don’t live within driving distance? No problem! Check out all of Ohsweken’s weekly Friday Night Excitement action live online for free via the Ohsweken Speedway Live Stream. The stream goes live at 7:30pm EST each race night at www.OhswekenSpeedway.ca.