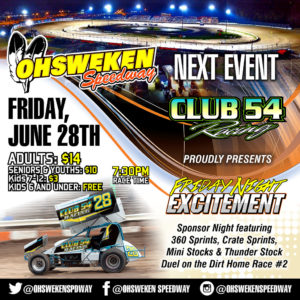 After finally getting his first win of the season last Friday night, Mississauga’s Mack DeMan holds the current Kool Kidz-Corr/Pak 360 Sprint Car point lead. DeMan has had a spectacular start to the campaign with a pair of runner-up and a pair of third-place finishes to accompany his win. Jim Huppunen sits second in the standings, 29 points back of DeMan with four top-fives. Huppunen is just a single point ahead of Dylan Westbrook. Caistor Centre, Ont. driver Cory Turner is fourth in the standings, just four points back of Huppunen in second. Ryan Turner meanwhile sits fifth in the standings after claiming his first podium result of the season last Friday night.

After five weeks of action, the Strickland’s Brantford Chevrolet Crate Sprint Car division has a tie at the top of the standings. Last week’s win pulled Brantford’s Lucas Smith into a tie with Fonthill pilot Blaine Barrow, who each have 362 points. In third is St. Thomas driver Jesse Costa, who is only 29 points off the lead despite missing one of the five features to date. Brian Nanticoke has pushed his No.9c into fourth and sits just seven points back of Costa. Nick Sheridan currently occupies the fifth and final top-five spot on the strength of a win and three top-five finishes in five starts.

Dave Bailey’s lead atop the Middleport Mechanical Thunder Stock division grew to 36 points after his second win of the season last Friday night. Trevor DeBoer, who has a victory, sits second in the standings. In third is Ken Sargent, who sits 48 points back of the lead with three top-fives in five weeks. Jim Lampman is 10 markers back of Sargent in fourth with four top-10 finishes to his credit. Vittoria’s Ryan Beagle is fifth, five points back of Lampman after a win and four top-10s to his name this year.

Kyle Wert’s third win of the season last Friday night has nearly cemented his spot at the top of the HRW Automotive Mini Stock division. In second is Tim DeBoer, 26 points back of the lead with three top-five finishes. Just two points back of DeBoer is Tristan Da Silva in third. Da Silva is the only driver in the division to finish all five races in the top-10 this season. Dusty DeBoer of Hagersville is just five points out of third and holds a 19-point advantage over fifth-place Wayde Thorne of Waterdown, Ont.

About Club 54 Racing: Club 54 Racing is a race team based in Middleport, Ontario on the scenic Grand River. The team consists of several Thunder Stock and Crate Sprint Car teams who compete weekly at Ohsweken Speedway. For more information, visit www.facebook.com/Club54racing.