OHSWEKEN, Ont. (September 2, 2018) – The final night of August at Ohsweken Speedway saw a total of 103 cars pit side for Epic Racewear Back to School Backpack night. Dozen of kids enjoyed winning a free Backpack to take back to school courtesy of Epic Racewear that was stuffed with school supplies from various Ohsweken race teams.

The Middleport Mechanical Thunder Stocks also ran last week’s postponed 50-lap and $2,000-to-win Gale’s Auto Aftermarket Cash Blast before racing the regularly scheduled event. Chris Hale won one of the biggest races of the year for the Thunder Stocks and then completed the sweep of the night when he claimed the checkered flag in the 20-lap Feature. 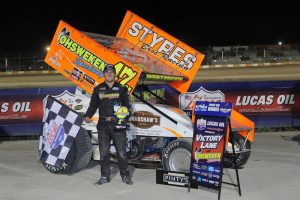 Jim Huppunen and Mikey Kruchka paced the field to the green flag for the Kool Kidz-Corr/Pak 360 Sprint Cars 20-lap make up Feature from July 27. Huppunen quickly took the lead on the bottom before Kruchka wheeled around the high side to gain the lead on lap two. Kruchka was able to hold the lead until a lap five caution and restart that saw Westbrook take over as the leader and DeMan running the top into second spot. The front of the field was maneuvering their way through lap traffic at lap 12 with Westbrook maintaining the lead to take the checkers and win his ninth feature of the season followed by DeMan, Kruchka, Huppunen and Steve Lyons.

The second 20-Lap feature event had Kruchka and Ryan Turner pacing the field of 19 cars on a slick track to the green with Steve Lyons, Jim Huppenen, Dylan Westbrook and Mike Thorne rounding out the front three rows. Kruchka drove hard for the lead with Turner, Huppenen and Lyons giving chase. By lap five the front of the field found themselves in lapped traffic. Huppunen stayed on the bottom and continued to challenge Kruchka. Lap 14 saw Kruchka get up too high on the berm and Huppunen took advantage to take the lead. Huppunen held the lead for the next three laps until Kruchka came around the outside and regained the top position from Huppunen with Lyons, Scott Kreutter and Turner hard on their heels. With one lap remaining, Kruchka continued to run out front while Huppunen and Lyons battled hard for the second spot with Lyons winning the battle. Kruchka took the checkered flag for his first victory this season followed by Lyons, Huppunen, Kreutter and Ryan Turner.

The lineup for the second 20-lap Feature was set using a timed hot lap session, with the top eight in Ohsweken weekly points handicapped into the top eight starting spots and the remaining cars starting based on their hot laps times. Mack DeMan was the Ackland Insurance Top Gun after turning the fastest lap with a time of 13.364 seconds. 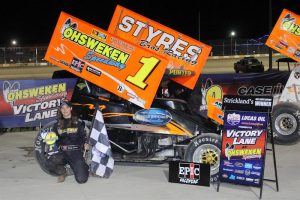 Holly Porter and Terry Baker set the pace for the Strickland’s GMC Crate Sprint Cars 20-lap Feature. Porter took the lead on the bottom over Baker with Aaron Turkey running the top line for third. Turkey raced Porter for the lead just as a caution came out on lap five. The restart had Porter, Turkey, Baker, Caleb Wood and Jacob Dykstra leading the charge. A yellow flag came out at lap nine for a Brian Nanticoke spin in turn two. Porter held the lead on restart with Turkey, Baker, Dykstra and Paul Klager giving chase and going four-wide for third. Exciting side-by-side racing between Porter and Turkey continued with Turkey taking the lead on the back straightaway on lap 14 just as a yellow flag flew for Trevor Young in corner one. Turkey held the lead on the restart over Porter with Shone Evans and Klager racing wheel-to-wheel and Lucas Smith racing into the top-five. A couple of late cautions and restarts saw Turkey and Porter exchange the lead with Porter regaining the lead on the inside and holding off Turkey to take the win at the checkers. Evans, Klager and Smith rounded out the top-five.

Baker, Porter and Evans were Heat Race winners earlier in the night while Dereck Lemyre won the B-Main. 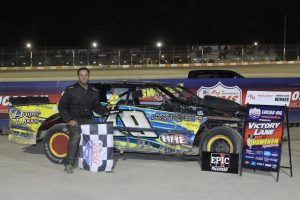 The ultra-competitive Middleport Mechanical Thunder Stock division had Jay Liverance and Lee Winger bring the field of 28 cars to the green flag for the 50-lap Gale’s Cash Bash. Liverance and Winger raced for the lead but two back-to-back cautions in the first two laps had them restarting on the front row and saw Mark Bauzin being removed on the flatbed, effectively ending his run for the Cash Blast.

On the restart Winger quickly gained the lead over Liverance with Aaron Turkey, Chris Dickie and Chris Hale running hard behind him. The action was furious as all the drivers jockeyed for position. A lap six caution saw Donny Lampman sideways in the top of turn two. Contact between Hale and Lampman saw Hale head to the pits with Lampman’s tire under his front bumper. The Hale crew quickly got the No.79 back on the track at the tail of the lead lap. The restart had Winger in front with Dickie, Dave Bailey and Steve Vanderzdan giving chase. By lap eight Bailey had taken the lead over Winger. Despite several cautions, Bailey continued to maintain a straightaway lead while Trevor DeBoer and Hale ran side-by-side at lap 33 for second. Bailey ran his line on the top and Hale, who was looking for an advantage, ran the bottom. The race between them continued till lap 42 when Hale used to the bottom and took over the lead from Bailey with Mark Fawcett hanging in third and waiting for an opening. As the top cars weaved through lapped traffic, Hale stayed out front to take the checkers over Dave Bailey, Mark Fawcett, Ryan Dinning and Trevor DeBoer and win the $2000 Gale’s Cash Blast purse.

The second feature for the Middleport Mechanical Thunderstocks saw 28 cars line up for the 20-lap event with Aaron Rewutzsky and Liverance taking the green at the front of the field. Liverance led the charge but contact between Brian Teeple and Rob Hoskins had the field lining up for a restart and Rewutzsky took advantage to regain the point. Contact between Liverance and Dinning saw Liverance go tail for intentional contact while Bauzin and Billy Bleich suffered collateral damage.

Rewutzsky, Jim Lampman, Dickie, Hale, Blake Bomberry and Ken Sargent led the charge on the restart. Rewutzsky got too high and Hale charged through the opening to take the lead with Sargent on his bumper. A lap nine melee when Vanderzdan spun in the top of turn four saw several cars sustain damage and Dickie being towed off the track. The restart had Hale out front and Sargent, Ryan Beagle, Blake Bomberry hard behind him. By lap 15, Hale had opened a lead of several car lengths when a late caution came out on lap 17 that found Vanderzdan being penalized for an intentional caution. Hale stayed out front on the restart with Beagle and Dave Bailey battling side by side for second, Sargent, Bomberry and Jon Lowenberg raced hard behind them. Hale held the lead to take his second victory of the night with Dave Bailey, Ryan Beagle, Jon Lowenberg and Blake Bomberry rounding out the top-five.

Vanderzdan won the B-Main earlier in the night after the lineup for the second feature was set by handicapping for the top-15 cars in points in attendance. 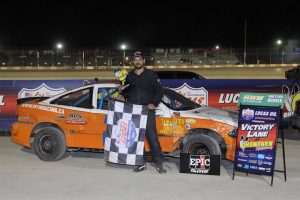 The unpredictable HRW Automotive Mini Stock Feature had Tim Jamieson and Cody Sommerville line-up on the front row for the 15-lap Feature event. Jamieson ran to the lead with the drivers fanning out four-wide behind him. Matt Nuell took over the lead from Jamieson on lap two with Wayde Thorne, Kevin Thorne, Jonathon Ayrton, Dusty DeBoer, Martin Schroeder, Sommerville and Jason Tolton racing hard in a pack behind him. A red flag on lap four saw the points leader Gillian Hils go around in turn one and take hits from multiple drivers. All the drivers were unhurt but Hils and Tim Nuell received sufficient damage that ended their nights. The restart saw Nuell and Ayrton on the front row and race into turn one with Nuell regained the lead as Ayrton and Dusty DeBoer raced single file behind him. Nuell, Ayrton and DeBoer quickly separated themselves from the rest of the pack by several car lengths while the battle continued for the remaining top-five positions. Nuell stayed out front to lead the remainder of the race and claim the win at the checkers followed by Jonathon Ayrton, Dusty DeBoer, Tim DeBoer and Brandon Janssens. 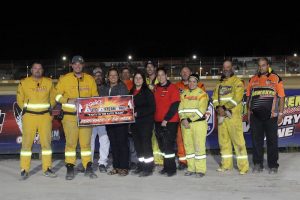 Gale’s Performer of the Week

The Gale’s Auto Aftermarket Performer of the Week was awarded as a surprise on Friday night to the entire Ohsweken Speedway safety team. The team work’s a thankless job each week and often swelters in the summer heat while wearing full fire suits in order to be ready to respond to any on track issues. On Friday, August 24 they were forced to respond to several Sprint Car wrecks and worked tirelessly to ensure all drivers were safely removed from their cars. Ohsweken’s safety team earned the recognition they deserve as one of the best safety teams in all of motorsports.

Up Next at Ohsweken Speedway

Ohsweken Speedway returns to action on Friday, September 7 for Insta-Panels night which also marks championship night for the Kool Kidz-Corr/Pak 360 Sprint Cars and the Strickland’s GMC Crate Sprint Cars. The race will be a combined points event for the Strickland’s GMC Crate Sprint Cars and the Action Sprint Tour powered by RaceRivalz.com, who will crown their inaugural tour champion. The Middleport Mechanical Thunder Stocks and HRW Automotive Mini Stocks will also be in action with 20-lap and 15-lap Features, respectively. Fans will have a chance to buy their favourite drivers merchandise in the Racers’ Marketplace behind the main grandstand beginning at 6:00pm. Race time is 7:30pm and adult admission is just $14 and children 12 and under are $3 or less. For additional event information, visit www.ohswekenspeedway.ca.

About EPIC Racewear: Based in Hanover, Ontario, EPIC Racewear is the official Racewear of Ohsweken Speedway. EPIC is a company fueled by the passion of racing, where the customer is treated as everyone would like to be treated – fairly and honestly. Brothers Dan and Bob Bailey founded EPIC in 2014, and have exploded into the racing community. Family ties, friendships, and a 40 year old family business have paved the way for instant trust. Quality customer service throughout the ordering process, and post-sale follow up to ensure client satisfaction create word-of-mouth advertising, and ensures repeat customers. EPIC is proud to offer individual custom designs, most of which are included with a racewear purchase. EPIC strives to avoid minimums, setup fees, and other supplemental charges whenever possible. Looking for swag, t-shirts, hats, or flags? No problem. Drop EPIC a line for a straight talk, straight answer quote today! Visit them at www.epicracewear.ca, e-mail them at info@epicracewear.ca or call them at 519 374-9900. Look – Feel – Be – EPIC.