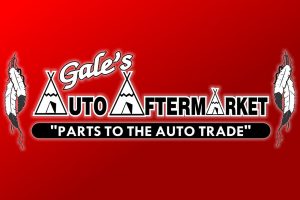 OHSWEKEN, Ont. (August 22, 2018) – Ohsweken Speedway continues its 23rd season of Friday Night Excitement on August 24 as Gale’s Auto Aftermarket presents Minor Sports night featuring Gale’s Cash Blast for the Middleport Mechanical Thunder Stocks and the return of the Race of Champions Sportsman tour. Kids who show up wearing a minor sports uniform of any kind will enjoy free grandstand admission for the night.

The night also marks the return of the Middleport Mechanical Thunder Stock Gale’s Cash Blast for the second straight year. On Friday night, the Thunder Stocks will battle in a 50-lap showdown with a $2,000 prize awaiting the first Ohsweken regular across the finish line, $750 for the second regular and $500 for third.

The Race of Champions Sportsman Tour makes its return to Ohsweken for the second straight year. The tour’s originally scheduled June 22 date was rained out. 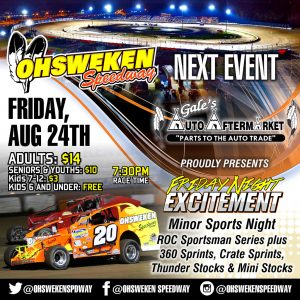 The drivers of the Race of Champions Sportsman tour have had to wait an extra two months for their chance to race at Ohsweken in 2018, but it appears it will be well worth the wait as Sportsman racing makes its only appearance at the fast 3/8-mile in 2018. Chad Chevalier has won each of the first two RoC visits to Ohsweken in 2016 and 2017. Brad Rouse scored a DIRTcar Series victory at Ohsweken last season and a Shootout victory in 2013. Jay Mallory is the all-time winningest Sportsman driver in Ohsweken history with 29 victories. He last won in June 2015 and will look to earn his 30th victory on Friday night.

So far in 2018, Dylan Westbrook has dominated the Kool Kidz-Corr/Pak 360 Sprint Car division. Westbrook added to his point lead last week with a second-place finish while Cory Turner, who sits second in the standings, wound up sixth. Westbrook has seven wins this year, but appears to have several drivers challenging him as the season winds towards it’s pinnacle at the Canadian Sprint Car Nationals in September. Three other drivers have also graced Lucas Oil victory lane this season, including Turner, Mack DeMan and Scott Kreutter, who earned his first Ohsweken win last Friday night. Will another new face take the checkers this week?

The Strickland’s GMC Crate Sprint Cars have seen arguably the most parity ever in the division’s history with a solid grouping of drivers taking turns in Lucas Oil Victory Lane. Division point leader Shone Evans, who has been Mr. Consistent all season long, scored his first win of the season last Friday night to become the seventh different winner this season. Holly Porter leads the way with three wins while her teammate Aaron Turkey has a pair of wins as does the injured Jesse Costa and teenager Jacob Dykstra. Sprint Car rookie Lucas Smith also has a win along with sophomore pilot Liam Martin. It seems increasingly likely that somebody else may get their first win this week as well.

The Middleport Mechanical Thunder Stocks will race in one of their biggest events of the year with a bonus $3250 added to their purse in a special 50-lap showdown for the second Gale’s Cash Blast. It is the first of two 50-lap races, with the second coming at the Brock Leonard Memorial on September 7. Dave Bailey leads the division point standings and the win column with five wins to date, including one last Friday night. Ryan Dinning, Logan Shwedyk, Mark Bazuin, Ken Sargent, Lee Winger, Trevor DeBoer, Christopher Hale and Ryan Beagle all have single victories as well in what has mean arguably the most unpredictable division at the track this year.

The HRW Automotive Mini Stocks are back in action as well. Point leader Gillian Hils survived a scare last week after transferring through the B-Main before earning a top-five finish in the main event. Ancaster’s Kyle Wert is coming off his second win of the season and second in three weeks as well. Nick Masi leads the win column with four checkered flags to date. Hils, Sean Iftody, Tim DeBoer, Dusty DeBoer, Mike Sarantakos, Matt Nuell and Jason Tolton all have had single trips to Lucas Oil victory lane.