by Tommy Goudge (September 16, 2017) – Ohsweken, Ontario – Ohsweken Speedway officials are pleased to announce that Inside Track Motorsport News has returned to present an award at the Arrow Express Canadian Sprint Car Nationals weekend.

The fastest Canadian driver during group time trials for Saturday’s Canadian Sprint Car Nationals will receive a $300 CAD award from Inside Track Motorsport News. Past winners of the Fastest Canadian Qualifier award include 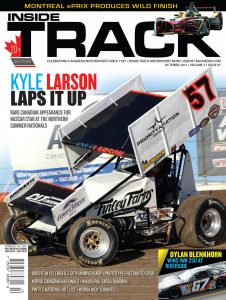 Many other cash prizes will also be available, pushing the total purse for the Saturday, September 16 event over $70,000. Stay tuned for more exciting announcements coming soon regarding Canada’s largest short track event!

About Inside Track Motorsport News: From local grassroots racing to Canadian touring series and the Canucks who compete on the international stage, Inside Track Motorsport News is the leader in terms of timely, in-depth and thought-provoking coverage of the motorsports that matter to Canadians. Stock cars, road racing, drag racing, karting, rallying, motorcycles and several other racing disciplines appear in every issue. Visit www.InsideTrackNews.com today to learn more!

This year’s Burger Barn Night Before the Nationals again includes a pair of 15 lap A-Features for the 360 Sprint Cars, plus the Dave McLeod Memorial Shootout, Kevin Ward, Jr. Young Stars Challenge, and the Middleport Mechanical Thunder Stocks, HRW Automotive Mini Stocks, and Gale’s Auto Aftermarket Bombers. Both of the Twin 15 A-Feature winners on Friday will be guaranteed a starting spot in the Saturday night Canadian Sprint Car Nationals A-Feature.

The Dave McLeod Memorial Shootout will feature top drivers from each of the six CSCN affiliate sanctions. The youngest drivers signed in for competition on the Night Before the Nationals will make up the 13 car starting field for the 13 lap Kevin Ward, Jr. “Young Stars Challenge”.

CSCN ENTRY INFO
Entries continue to be accepted for the 2017 Canadian Sprint Car Nationals. Teams are encouraged to save time by submitting entry information online at the following link: https://ohswekenspeedway.ca/?page_id=5093

BORDER CROSSING
Teams traveling to Ohsweken from outside Canada are encouraged to click on the following link – http://www.ohswekenspeedway.ca/BorderForm.pdf – to view and print documents which will help you in the international border crossing process.

CSCN HISTORY
The Canadian Sprint Car Nationals has been the annual season-closing event at Ohsweken Speedway since 2005, and brings together drivers and teams from several affiliated sanctioning organizations in the area, plus teams and drivers from all over North America and beyond. The event has drawn an average of 70 entries for the 12 previous editions, with a total of 249 different drivers from 16 American states, five Canadian provinces, Australia, and New Zealand taking part.

About Ohsweken Speedway: Founded in 1996, Ohsweken Speedway is a motorsports complex which includes a 3/8 (0.375) mile clay oval track. The facility is owned by the Styres family, and located in the village of Ohsweken, Ontario, Canada. Ohsweken’s weekly Friday night racing program runs from May to September each year, featuring 360 Sprint Cars, Crate Sprint Cars, Thunder Stocks, Mini Stocks, and Bombers, while the season finishes each year with the annual Canadian Sprint Car Nationals. Ohsweken Speedway also hosts weekly Micro Sprint racing on Thursday nights, and has been a yearly stop on the World of Outlaws Sprint Car Series schedule since 2007.