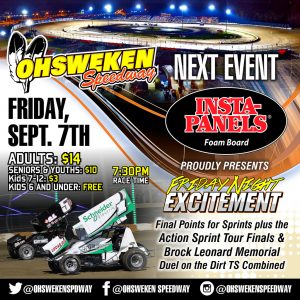 OHSWEKEN, Ont. (September 6, 2018) – Another exciting night of action is ready to roll at Ohsweken Speedway as Insta-Panels presents Sprint Car championship night and the Brock Leonard Memorial on Friday, September 7. Ohsweken will crown two of its four champions by night’s end as Friday’s race marks the final points race for the Kool Kidz-Corr/Pak 360 Sprint Cars and the Strickland’s GMC Crate Sprint Cars. The Action Sprint Tour powered by RaceRivalz.com will also make its third and final appearance of the season as it crowns its inaugural champion as well.

Also on the card is the prestigious 50-lap Brock Leonard Memorial for the Middleport Mechanical Thunder Stocks as well as a regular 15-lap event for the HRW Automotive Mini Stocks. The Brock Leonard Memorial is one of the biggest races of the year for the Thunder Stocks and is run annually in honour of the late Brock Leonard, a longtime Speedway official and father of Ohsweken race director, Doug Leonard, who passed away in 2012. The race is also the second of four combined races for the Insta-Panels Duel on the Dirt Series.

Prior to the action on the track, a pre-race autograph session will take place behind the main grandstand with select drivers and their cars, allowing fans to meet some of their favourite drivers right before they hit the track. The final Racer’s Marketplace of the season will also take place behind the main grandstand to allow fans the opportunity to purchase their favourite driver’s apparel on the grandstands side. It all gets underway when the grandstand gates open at 6:00pm.

The 2018 championship has already been decided in the Kool Kidz-Corr/Pak 360 Sprint Car division as point leader Dylan Westbrook has locked up his second straight title. Westbrook has a 115-point lead over Jim Huppunen entering this week’s action, with only 85 points awarded to the race winner, making the lead insurmountable. There is still plenty to race for, however. Huppunen’s advantage for second is just six points over Cory Turner. Mack DeMan is fourth and 22 points back of Turner while Steve Lyons is fifth, just one point ahead of Ryan Turner. Mikey Kruchka, Mike Thorne, Tyler Hendricks and Jamie Turner round out the top-10 entering the final night of points racing.

In the Strickland’s GMC Crate Sprint Car division, Shone Evans has a stranglehold on the championship title. Aaron Turkey remains mathematically alive in the title hunt, but faces a 44-point deficit entering the final night of competition. Evans needs to finish 21st or better in the A-Feature to guarantee the title. The two drivers will also be battling for a separate championship as the race doubles as the final points event on the inaugural Action Sprint Tour, where Evans leads Turkey by just eight points. Evans needs a finish of third or better to secure the AST championship.

In the Ohsweken standings, Turkey has only a 14-point gap over teammate Holly Porter for second. Rounding out the top-five are Hannah Ferrell and Lucas Smith, who separated by just four points for fourth. Jacob Dykstra, Dereck Lemyre, Jesse Costa, Josh Hansen and DJ Christie round out the top-10 in the standings.

The Middleport Mechanical Thunder Stocks have two more points nights in order to decide their championship, including the 50-lap and high unpredictable Brock Leonard Memorial. Friday’s race marks seventh edition of the race in honour of former track official Brock Leonard. Past winners of the race include last year’s winner Ryan Beagle, Ryan Dinning, Karl Sault, Lee Winger, Ryan Turner and Brad Herron. No driver has won the event more than once.

Entering the event, Dave Bailey holds a 93-point advantage over Trevor DeBoer and 94-point gap over Logan Shwedyk. A finish of third or better in the Brock Leonard Memorial would guarantee Bailey his fourth-straight Thunder Stock track championship before he takes the green flag in the season finale on September 14. Fourth in the standings is Ken Sargent, just 15 points back of Shwedyk for third while Christopher Hale completes the top-five. Ryan Beagle, Jim Lampman, Mark Bazuin, Billy Bleich Jr. and Blake Bomberry Jr. round out the top-10 entering this week’s 50-lapper.

Unlike the other three divisions, the HRW Automotive Mini Stock title is still very much up for grabs with two races to go. Gillian Hils leads Matt Nuell by only two points in the standings with Sean Iftody trailing in third only 24 points back of the lead, a gap that he is capable of overcoming in two weeks. Dusty DeBoer and Jonathan Ayrton round out the top-five and are still mathematically alive in the championship chase. Completing the top-10 are Kyle Wert, Mike Sarantakos, Tim DeBoer, Tristan Da Silva and Martin Schroeder.

About Insta-Insulation/Insta-Panels: Insta-Insulation has been satisfying customers since 1991, delivering superior service, expertise, and insulation products in the Greater Toronto Area and throughout Southwestern Ontario. They provide only the best to their customers, and they are committed to helping you save money, and get the most out of your investment. As the official insulation contractor for Mike Holmes of Holmes Inspection and Bryan Baeumler of Leave it to Bryan, Insta-Insulation is held to the highest customer expectations on a daily basis. Insta-Insulation boasts knowledgeable and skilled people throughout every level of their company across all of its Ontario markets. Call Insta-Insulation toll-free at 1-800-668-0311, and visit their website at www.InstaInsulation.com