OHSWEKEN, Ont. – August 25, 2017 – The Super DIRTcar Series made its return to Ohsweken Speedway for the second time in its history and first since 2015 in the Townline Variety Triple Crown Showdown presented by Stoneridge Specialty Insurance. A total of 76 cars were signed in to the pit area with the Kool Kidz-Corr/Pak 360 Sprint Cars and Go Nuclear Late Model Series on the card.

Three drivers were eligible for a $5,000 bonus if they could win two of the three Features on the night. Stewart Friesen was driving his Big-Block Modified with the Super DIRTcar Series and his 360 Sprint Car. Charlie Sandercock piloted his 360 Sprint Car and Late Model while Mike Maresca battled in Big-Block Modified competition and in Late Model action.

Super DIRTcar Series (25 Entries)
The first 49 laps of the Triple Crown Showdown were a side-by-side battle between polesitter Larry Wight and front row starter Chad Brachmann, but the final 25 laps were all Matt Sheppard on Thursday night at Ohsweken Speedway. The reigning Super DIRTcar Series champion took the lead from Brachmann on lap 50 following a restart and couldn’t be stopped on the way to his fifth straight Series victory. Brachmann finished second after winning the Series’ inaugural event at Ohsweken in 2015.

The race provided an interesting set of circumstances for the field of 25 drivers in attendance. A late evening rain and mist after all heat race competition had been completed led to a 45-minute rain delay. The track crew kept the racing surface in order and the Big-Block veterans of the Super DIRTcar Series produced a thrilling show when the green flag waved just after 11:00pm before Sheppard drove from 12th to earn the win.

“Mother Nature didn’t want to see this race happen tonight, but I’m thankful we got it in,” Sheppard said. “It’s unreal. We saw the rain there earlier tonight and picked the worst number of the bunch in 12, but as usual these guys gave me an awesome racecar. It was a lot of fun out there. We’ve only been here once before. It’s a very wide, racey, fast track. We were running the bottom, top and middle. I’m just really thankful to be here tonight. Five in a row, unbelievable.”

Brachmann led the opening two laps before Wight retook the top spot on lap three. He paced the field through to the first caution for a big piece of debris on the front stretch with 12 laps complete. Following the restart, Tim Fuller appeared to be making his way forward as he moved into fourth and third-running Billy Decker challenged Brachmann for second.

By lap 30, it was clear Sheppard not only had a top-five car, he was a contender when he got by Fuller for fourth. One lap later, Stewart Friesen’s day ended when he slowed in turn four with mechanical problems to bring out a yellow flag. Friesen was running in the top-10 at the time and received the Speedy First Aid Hard Luck Award as a result of his misfortune.

Wight and Brachmann continued their side-by-side battle on the restart with Brachmann retaking the point on lap 37. Meanwhile, Sheppard raced to third behind the top two. Sheppard and Wight exchanged the second spot over the next four laps before Sheppard eventually emerged with the position just prior to a lap 44 yellow. It was on the ensuing restart with 49 laps complete that Sheppard used the inside lane position, after Brachmann chose to restart in the high groove, to take the lead and pace the final 75 laps for the victory.

“We had a good car, but I think that guy is superhuman,” Brachmann said of Sheppard following the finish. “He doesn’t make mistakes. I made a mistake on that restart, caught that hole going into (turn) three and it was enough to let him get by me. Then it was just chasing after that and hoping that he made a mistake, but that ain’t going to happen.”

Sheppard had to hold off Brachmann throughout a pair of restarts with 10 and nine laps to go and was quick to credit the Sanborn, NY driver for his strong drive.

“Chad was very good tonight,” Sheppard said. “I first got into second and I said ‘man, I don’t know if we’ve got anything for him tonight’. I snuck by him on the restart and he was probably just as good as we were. If I didn’t get by him there, who knows, I may have never got by him.”

For Brachmann, it was his second top-five finish with the Super DIRTcar Series this season in as many starts, but it was his first race with Big-Block power under the hood of the No.3.

“My dad put his heart and soul into this Big-Block program, so I’m glad to come out here and run halfway decent,” Brachmann said. “Will see what the rest of the year brings for us for Big-Block Racing.”

Behind the furious battle for the lead was Pat Ward, who earned the KSE Hard Charger award by driving from 13th to complete the podium in third. Ward methodically picked his way through the front-runners in the second half of the race to continue his strong string of runs.

“The car was really good,” Ward stated. “I seemed to be getting through that hole in (turn) one better than anybody else, except for maybe Matt. They would slide up and I could just stick it in there and go, so the car was good.”

Decker earned a fourth-place finish, his eighth top-five result in 15 Series starts this season. Wight rounded out the top-five in his No.99L.

Billy Whittaker started the night with his first career Super DIRTcar Series Fast Time Award and followed it up with a heat win. Billy Decker and Tim Fuller also earned heat race victories. Ward earned the KSE Hard Charger award by advancing from 13th to 3rd. Stewart Friesen claimed the Speedy First Air Hard Luck Award after he dropped out while running in the top-10. 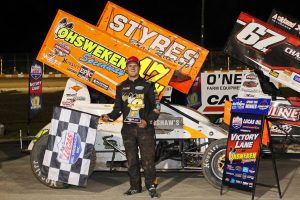 Cory Turner and Mitch Brown started on the front row for the Kool Kidz-Corr/Pak 360 Sprint Car Feature. Brown led the opening lap while Dylan Westbrook raced to second. Turner pulled off on lap three while running third, allowing Brown and Westbrook to pull away from the rest of the field. On lap seven, Westbrook pulled off a slide job in turn four to take the lead from Brown.

Westbrook pulled away to a straightaway advantage over Brown while racing through lapped traffic in the second half of the race. The slower cars didn’t cause Westbrook any issues as he extended his lead over Brown to a straightaway over the final 10 laps to claim the win. Over the final four laps, a furious battle developed for third and fourth between Mitch Brown, Parker Price-Miller and Stewart Friesen. Price-Miller worked from fifth to take third at the finish after dicing through the field. Mitch Brown and Friesen rounded out the top-five. 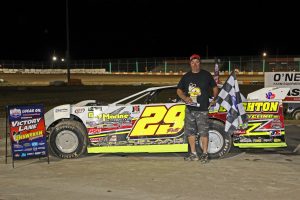 Mike Maresca and Charlie Sandercock started on the front row for the Go Nuclear Late Model Series A-Feature. Maresca jumped out to an early lead before a lap two caution when Chris Fleming spun in turn two. Maresca maintained the lead on the restart before another yellow at lap four. Again on the restart, Maresca pulled away to a lead while Rob Pietz raced into second.

On lap five, a red flag for a major pile-up in turn two became an extended open red when rain began to fall on the track. The Go Nuclear Late Models did an impressive job remaining on track to continue working moisture into the surface to make sure it wasn’t lost. When the rain stopped, the cars returned to the pit area to refuel before returning to the track for the remaining 15 laps of their Feature.

When the race resumed, Phil Potts made his presence felt restarting in third after beginning the race back in eighth. He pressured the top two cars until he drove to second on lap nine and then too the lead from Maresca off a lap 11 restart by building momentum through the outer lane of the racetrack.

Steve Baldwin followed Potts to the front and raced into second, but Potts pulled away to 10 car-length advantage with five laps to go. Meanwhile, Sandercock made his way back to third after slipping as far back as sixth.

The final restart of the night came on lap 17 and Potts was not going to be denied the victory. He paced the final three laps to win his first career race at Ohsweken and second with the Go Nuclear Late Model Series. Sandercock got past Baldwin for second with two laps to go. Maresca and Sam Pennacchio rounded out the top-five.

Advanced reserved seating tickets are on sale now for all of Ohsweken Speedway’s 2017 major events, including the Triple Crown Showdown featuring Super DIRTcar Series Big-Block Modifieds on August 24, and the 13th annual Canadian Sprint Car Nationals on September 15-16 are on sale now! Visit www.ohswekenspeedway.ticketforce.com or call 519-717-0023 to order and for more information. For the full 2017 schedule of events, click here.

About Townline Variety: Townline Variety is a full service Gas Station, Variety Store and Country Style coffee shop. Located at 7329 Indian Line at the corner of Mohawk Road on the Six Nations Reserve, Towline Variety has everything you need to get your trip started or to keep you on the road. Find them on Facebook at Facebook.com/TownlineVarietGasCountryStyle.