Second Live Broadcast of All North Racing powered by Pinty’s on MavTV Canada Set for 9:00pmEST 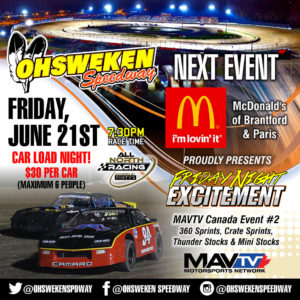 OHSWEKEN, Ont. (June 19, 2019) – Ohsweken Speedway is excited to return to action this week on MavTV Canada for the second live broadcast of All North Racing powered by Pinty’s featuring Emergency Services night presented by McDonald’s of Paris and Brantford. The night honours first responders by admitting them free with their professional ID and thanking them for their service each day.

Admission is $30 per car load (up to six people) or regular $14 adult admission for less than a car load. Race time for McDonald’s of Paris and Brantford Emergency Services night is 7:30pm. The pit gates open at 5:00pm before the main grandstand opens at 6:00pm. For the full schedule of Ohsweken Speedway events, visit www.ohswekenspeedway.ca.

Dylan Westbrook’s three-race win streak in the Kool Kidz-Corr/Pak 360 Sprint Car division came to an end last week at the hands of a mechanical failure and allowed Cory Turner to drive to his first win of the season. Mack DeMan was the runner-up finisher and on the strength of his fourth-straight podium finish, the Mississauga, Ont. native has claimed the points lead. Turner’s win was his third top-five of the season and puts him second in the standings, just 13 markers back of DeMan. In third is Fenwick’s Jim Huppunen who has four straight top-fives to start the season, just a single point back of Turner. Westbrook now sits fourth in the standings, 19 points back of the lead and rounding out the top-five is Alden, NY native Scott Kreutter who has three top-five finishes so far this year.

Although he doesn’t have a win yet this year, Fonthill’s Steven Beckett is the only driver in the Strickland’s Brantford Chevrolet Crate Sprint Car division to record four top-10 finishes to start the year as part of an impressive start to the season for the No.08 team. His lead is slim, however, at just two points over Beamsville pilot Paul Klager who continues to have a strong sophomore Sprint Car season. Liam Martin is third in the standings. The Binbrook teenager has a victory and second-place finish to his credit and is just six points off the division lead. Nine points back of the lead in fourth is Lucas Smith of Brantford. Rounding out the top-five is Port Colborne’s Jacob Dykstra who is 18 points off the lead with a pair of top-fives to his name this year.

Surprise, surprise. Defending Middleport Mechanical Thunder Stock champion Dave Bailey is at the top of the standings after four weeks of action. The Hagersville driver only has one win, but has been nothing but consistent with four straight top-fives to start the year, the only driver in the division to accomplish the feat. He leads May 31 winner Trevor DeBoer by 32 points. Ken Sargent sits third with a 39-point deficit to overcome. Caistor Centre’s Jim Lampman currently occupies the fourth spot, just two points back of Sargent, but holds a 10-point gap over fifth-place Ryan Dinning.

Leading the HRW Automotive Mini Stock standings after four weeks is Tim DeBoer. He is one of only two drivers to record a top-10 in each start so far this year. Kyle Wert is in close pursuit though, sitting just five points back of the point lead on the strength of two Feature wins. While Waterdown’s Tristan Da Silva hasn’t yet recorded a top-five, he is the only driver other than DeBoer to finish all four races in the top-10. That’s placed him third in the standings just 24 points back of the lead. Just three points back of Da Silva in fourth is Nick Masi while Dusty DeBoer is 34 points back of the lead in fifth with three top-fives under his belt this season.

About McDonald’s Restaurants of Brantford & Paris: McDonald’s restaurants have served the world some of its favourite food since 1955. McDonald’s is more than just your local restaurant. They’re hardworking small businessmen and women, students working part-time, seniors getting the most out of life, and volunteers lending time to make a difference in the communities they live and work in. McDonald’s locations in Brantford include 73 King George Road, 27 Stanley Street, 300 King George Road, and 299 Wayne Gretzky Parkway, while they’re also in Paris at 307 Grand River Street North. Grab a bite to eat on the way to the races, or visit the drive-thru on your way home. Visit www.McDonalds.ca for more information.