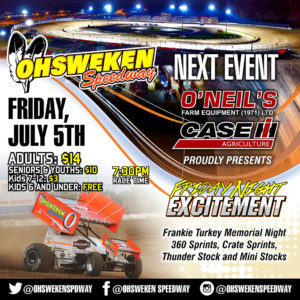 OHSWEKEN, Ont. (July 3, 2019) – Ohsweken Speedway is set to kick-off the month of July with a busy evening of Friday Night Excitement as O’Neil’s Farm Equipment and Case IH tractors presented Frankie Turkey Memorial night on July 5. The night will be run once again in honour of the late Frankie Turkey, uncle to track owner Glenn Styres, who passed away following a car accident at just 27 years of age. Frankie introduced Glenn to auto racing at a young age, and remains an inspiration for many parts of Glenn’s business – including the track’s trademark orange colour.

The championship standings in the Kool Kidz-Corr/Pak 360 Sprint Car division got a shake-up last week when point leader Mack DeMan crashed out of the race on proved to be the final lap of the rain-shortened event. The wreck completely erased DeMan’s lead atop the championship standings and now sees him tied for first with Fenwick’s Jim Huppunen, who scored his first win for Glenn Styres Racing last Friday night. Dylan Westbrook also pulled within five points of the division lead as well with his runner-up result last week. Currently fourth in the standings is Cory Turner, who sits 15 points back of the lead with a win to his credit. Rounding out the top-five is Mitch Brown, who is 22 points back of Turner in fifth. A total of 32 drivers have earned points this season in the 360 Sprint Car division.

The Strickland’s Brantford Chevrolet Crate Sprint Car division saw a first-time winner last week as Paul Klager visited Mister Transmission Victory Lane. The victory allowed Klager to climb back into the top-five in the point standings as he moved up from sixth to fourth and 27 points back of the division lead. At the top of the standings is Lucas Smith who holds a slim four-point advantage over Fonthill’s Steven Beckett, who continues to enjoy a strong season. In third is Jesse Costa, who sits just 15 points back of the lead despite missing the first week of action. After Klager in fourth is Mount Brydges eighth-grader Nick Sheridan, who sits just a single marker back of Klager in the fifth spot.

After another impressive performance last week where he won the B-Main before moving on to capture victory in the A-Feature, Dave Bailey extended his point lead atop the Middleport Mechanical Thunder Stock division’s championship standings to 57 points. Trevor DeBoer continues to be his number chaser in the second spot and has a six-point advantage over Ken Sargent. Caistor Centre driver Jim Lampman has taken the fourth spot, just two points back of Sargent and holds a seven-point advantage over fifth-place Ryan Beagle.

The HRW Automotive Mini Stocks have a tight points battle that will only get closer this week. The championship standings remain unchanged entering this week’s action after last week’s feature was rained out following the completion of all preliminary qualifying races. The Mini Stocks will start this week’s program with the June 28 feature that has Aidan Nigh and Mike Giberson scheduled to start on the front row. At the completion of the first Feature, the Mini Stocks will then launch into a completely fresh race program with a new set of points and starting positions up for grabs.

Entering the night, Kyle Wert is the point leader with a 26-point gap back to second-place Tim DeBoer. In third is Waterdown’s Tristan Da Silva, who sits just two markers back of DeBoer. Dusty DeBoer currently sits fourth, five points back of Da Silva and 33 points off the lead. Wayde Thorne rounds out the current top-five sitting 52 points back of the division lead.

About O’Neil’s Farm Equipment Case IH: O’Neil’s is the official track maintenance equipment provider of Ohsweken Speedway, and takes pride in being a family-owned business serving their community since 1918. A lot of things have changed over the years, but the principles of their dealership have stayed the same – They believe in serving their customers with honesty and integrity. Their roots were founded in the agriculture business, selling and servicing IH, Case IH, and Case equipment. As their dealership has grown, they have expanded by taking on quality lawn and garden products, and offering a hardware store. Visit the Case IH/O’Neil’s Farm Equipment website at www.ONeils.ca or visit the O’Neil’s Lawn & Garden store at 2461 Hwy 56 in Binbrook, just 20 miles from Ohsweken Speedway.