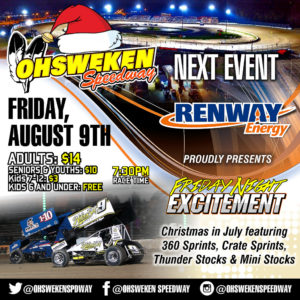 OHSWEKEN, Ont. (August 7, 2019) – Ohsweken Speedway gets back to its regular schedule of Friday Night Excitement on Friday, August 9 as Renway Energy presents Christmas in August. On the track, all four of Ohsweken’s weekly divisions will be in action, including the return of the Kool Kidz-Corr/Pak 360 Sprint Cars while the Strickland’s Brantford Chevrolet Crate Sprint Cars, Middleport Mechanical Thunder Stocks and HRW Automotive Mini Stocks will also be battling for a trip to Mr. Transmission Victory Lane.

The Kool Kidz-Corr/Pak 360 Sprint Cars will return to action this week for the first time since the Northern Summer Nationals on July 23. The track was closed on July 26 and the 360 Sprint Cars were given the night off on August 2 to allow drivers to compete in the Knoxville 360 Nationals. Dylan Westbrook was the only full-time Ohsweken regular to visit Knoxville. Westbrook timed in 14th-fastest of the 55 cars in attendance on his qualifying night before finishing the night with a sixth-place result in the B-Main. He finished the week with a seventh-place finish in the C-Main during the final night on Saturday.

Entering the first 360 Sprint Car race of August at Ohsweken, Westbrook is the Kool Kidz-Corr/Pak points leader with a narrow six-point gap over Mack DeMan. Westbrook has four wins to DeMan’s single victory, but the latter has the edge with an extra top-10 finish, nine in total, in 10 starts. Jim Huppunen remains very much a part of the championship conversation for the 360 Sprint Cars as he sits just nine points off the lead and only three points back of Westbrook. Huppunen has been dynamite since transitioning the famous Glenn Styres Racing No.0 in mid-June. Tilsonburg’s Cory Turner remains in championship contention just 25 points off the lead while his brother Ryan Turner rounds out the top-five in the standings.

And then there was one. After his second-place finish last week, Lucas Smith remains the only driver in the Strickland’s Brantford Chevrolet Crate Sprint Car division who has qualified for and started all 10 feature races this season. Entering this week’s action, Smith just three points back of Jesse Costa for the division point lead. Costa drove from 15th to an impressive third-place result last Friday night, sixth top-five of the season. Costa has also qualified for every feature this year, but mechanical problems on opening night prevented him from competing in the race.

After scoring his second win of the season last Friday night, Nick Sheridan has moved into third in the championship standings and sits just 15 points back of the championship lead. Steven Beckett slipped back to fourth in the standings, but still remains very much in the mix with only a 20-point gap separating him from the top. Rounding out the top-five is Beamsville’s Paul Klager.

Dave Bailey’s 10th straight top-five finish has allowed him to build a 50-point lead in the Middleport Mechanical Thunder Stock division. Bailey’s fellow Hagersville native Trevor DeBoer occupies the second spot and holds a 30-point advantage over third-place Ryan Beagle. Beagle’s gap back to fourth-place Logan Shwedyk of Jerseyville is 16 points. Rounding out the top-five is Caistor Centre, Ont. native Jim Lampman who has recorded three top-five finishes this season and is 18 points arrear of Shwedyk.

In the HRW Automotive Mini Stock division, Kyle Wert has a slim nine-point lead over Tim DeBoer for the championship lead. Wert has scored four wins this season, while Tim DeBoer has been incredibly consistent with nine top-10 finishes in 10 starts. The other half of the DeBoer Autosport stable is Dusty DeBoer, who currently sits third in the standings, so points back of Tim. Tristan DaSilva is another 20 points back of Dusty DeBoer in fourth and completing the top-five is Wayde Thorne, who is 67 points back of the lead and 18 markers behind DaSilva.