OHSWEKEN, Ont. (July 17, 2019) – Ohsweken Speedway is excited to carry on its annual tradition of bringing some of racing’s biggest stars to its 3/8-mile clay oval when Tony Stewart, Christopher Bell and Rico Abreu race at the Northern Summer Nationals presented by Burger Barn, Arrow Express, Nitro 54 Variety and Bradshaw Brothers fuels. All three drivers will be in action to take on Ohsweken’s stars of the Kool Kidz-Corr/Pak 360 Sprint Car division as well as some of the top drivers from across the northeast during two nights of action on Monday, July 22 and Tuesday, July 23. Each night features a $5,000 USD-to-win main event for the 360 Sprint Cars.

On both nights, the Features for all four divisions will air live on MavTV Canada motorsports network as the third and fourth episodes of All North Racing powered by Pinty’s starting at 9:00pm EST.

Race time each night is 7:30pm with hot laps scheduled for 7:00pm. Adult advanced reserved tickets are just $30 and can be purchased online, along with reserved camping spaces, at www.ohswekenspeedway.ca. 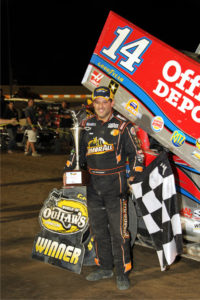 Next week’s event marks the return of three-time NASCAR Cup Series Champion Tony Stewart to Ohsweken Speedway for the first time since 2013. The current owner of the Ollie’s Bargain Outlet All-Star Circuit of Champions sprint car series and famous Eldora Speedway in Rossburg, Ohio is known as much for his dirt track achievements as his NASCAR success. A three-time NASCAR Cup Series champion, four-time USAC champion, two-time Chili Bowl champion and 1997 IndyCar champion, Stewart is one of the most versatile racecar drivers on the planet. The Columbus, Indiana native also has three career wins at Ohsweken, including his first career World of Outlaws win on July 27, 2011 before also winning for the second consecutive year on July 31, 2012. He has also won once in 360 Sprint Car competition, which came on July 30, 2012.

“I’m very much looking forward to getting back to Canada. Glenn, and his team always treat us so well,” said Stewart earlier this year. “I won my first Outlaw race at Ohsweken back in 2011, I remember it vividly. It was the week before the Brickyard in Indy and my victory lane check was strategically placed in the window of my motorhome for everyone to see at IMS. There is always such a strong contingent of cars that come to Ohsweken for the Summer Nationals. I hope we can put on a show for the fans.”

So far in 2019, Stewart has competed nine times with the All-Stars where he has earned three top-fives and six top-10 finishes. Stewart has also raced in his 360 Sprint Car several times this season, primarily with the United Sprint Car Series (USCS), where he currently sits 10th. 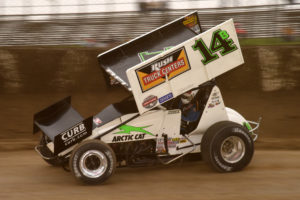 Bell is currently in his second full-time season as the pilot of the Joe Gibbs Racing No.20 in the NASCAR Xfinity Series where he currently sits second in series points with four wins to his credit this year. He also scored a popular Sprint Car win at Grandview Speedway in Bechtelsville, PA during Pennsylvania Speedweek while driving the Kevin Swindell-owned No.39 on July 2, 2019. Bell also has four career World of Outlaws wins to his credit, including his most recent triumph on October 14, 2018 at Eldora Speedway in a Tony Stewart Racing-prepared car. 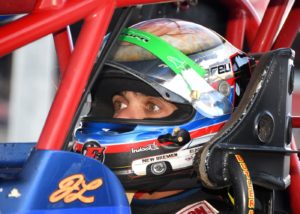 St. Helena, California driver Rico Abreu will also be making his first career appearance at Ohsweken at the Northern Summer Nationals. The ultra-popular driver has become a household name in Sprint Car racing over the past few seasons. Abreu’s No.24 Sprint Car has become an iconic threat to win on the national 410 Sprint Car scene in recent years as proven by his eight career World of Outlaws wins to date. Abreu is also a decorated Midget driver who won the 2016 Chili Bowl Midget Nationals Championship with the Keith Kunz Motorsports stable. The 26-year-old, who lists Eldora Speedway as is favourite track, is excited to make his debut on Ohsweken’s high-banks.

“I’m glad our schedule allowed us to come this year,” Abreu said. “I have never raced my Sprint Car in Canada. I get to race the Kings Royal at Eldora and then drive right to Ohsweken from there. What a week of racing! I can’t wait. Thanks to Glenn for inviting me back.”

At the time of writing, Abreu has entered 14 World of Outlaws Sprint Car Series events in 2019, where he has claimed two top-five finishes and five top-10 results. Abreu has also been active in both 410 and 360 Sprint Cars in his home state of California, with the Kings of Thunder and Sprint Car Challenge tour’s, while also competing nationally with the All Star Circuit of Champions and during Pennsylvania’s Sprint Speedweek in early July.

In addition to the three star drivers and Ohsweken’s cast of Kool Kidz-Corr/Pak 360 Sprint Car weekly standouts, the event will also feature some of the top drivers from across the northeast, including three-time Canadian Sprint Car Nationals winner Steve Poirier and 2017 Lucas Oil Empire Super Sprints champion Jason Barney, to name just a few.

Tuesday’s event will also feature some of the best regional races from New York and across Ontario. The Race of Champions Sportsman tour will return to Ohsweken for the fourth straight season. Brent Begolo won last year’s visit, while Chad Chevalier claimed Ohsweken wins with the tour in 2016 and 2017. The Action Sprint Tour makes its first of two stops at Ohsweken this year and will largely feature the majority of drivers who compete weekly with the Strickland’s Brantford Chevrolet Crate Sprint Cars. During the tour’s inaugural season, Aaron Turkey, Jacob Dykstra and Josh Hansen claimed Ohsweken wins. Finally, the Middleport Mechanical Thunder Stocks will round out the car. Entering this weekend’s action, Trevor DeBoer and Dave Bailey are tied with three wins each in the division this season.

For further event information on Ohsweken Speedway, or to purchase tickets for the Northern Summer Nationals, visit www.ohswekenspeedway.com.

About Bradshaw Brothers: Based in Waterford, Ontario, Bradshaw Fuels Limited was founded in 1979. The company’s line of business includes the wholesale distribution of petroleum and petroleum products. Call them at 519 443-8611, or visit their website at www.BradshawFuels.com.