OHSWEKEN, Ont. – Sept 8, 2017 – Cool September temperatures did not put a damper on Insta-Insulation Monster Mash Night at Ohsweken Speedway on Friday as 42 sprint cars packed the pit area for the final races before the 13th Annual Canadian Sprint Car Nationals weekend. When the dust settled, it was Dylan Westbrook and Mack DeMan picking up feature wins.

Cory Turner set the pace early in the 20-lap Kool Kidz-Corr/Pak 360 Sprint Car feature as he jumped out to a lead over pole-sitter Tyler Hendricks.

Hendricks soon found himself skirmishing with Cory’s brother Ryan for second. The two engaged in a side-by-side battle for several laps, which prevented sixth-place starter and track champion Dylan Westbrook from moving into the top three.

On lap 8, Westbrook was finally able to sneak by Hendricks and Ryan Turner, and he immediately began to cut into Cory Turner’s sizeable lead.

Lapped traffic slowed Cory Turner, and by lap 10 Westbrook was already right on his tail. Westbrook expertly navigated the slowed cars by using a low line. He breezed by Turner coming out of turn 2 on lap 14 and cruised to rest of the way to pick up the win. 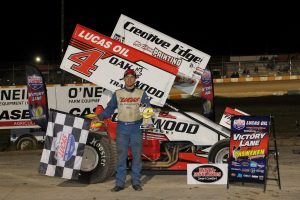 A scramble start meant that B-Main winner Brian Nanticoke started on the pole for the 20-lap Strickland’s GMC Crate Sprint Car feature. Nanticoke lined up next to Josh Shantz, who used his starting spot to his advantage, leading the first 17 laps.

Shantz’s lead was aided by three cautions in the first nine laps of the race. The yellows meant that he was able to hold off eight-place starter Mack DeMan, who had already moved up to second place.

On lap 17, after a long green flag run, DeMan flew by Shantz using the high side of the racetrack. Lapped traffic prevented any chance of a Shantz comeback in the final two laps as DeMan picked up the win.

Jesse McDonald, Hannah Ferrell, and Ryan Hunsinger fought tooth and nail for third place as Shantz and DeMan combatted for the lead. When checkered flew, McDonald edged Hunsinger for third. A broken nose wing cost Ferrell a shot at the podium, but she was still able to round out the top-five.

Two 12-lap mechanics races were run in each of the three weekly Ohsweken Speedway stock car divisions. Jesse McDonald and Kyle Magrin won the Middlesport Mechanical Thunder Stock races. Billy Schwartzenburg and Jeff Farnsworth were at the front of the pack when checkered flew in the two HRW Automotive features. Dustin Longboat and Archie DeBoer picked up victories in the Gale’s Auto Aftermarket Bomber mechanics races. 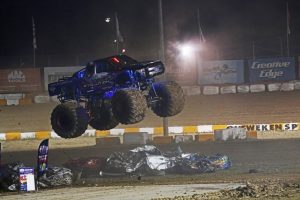 Monster trucks Overkill Evolution, Anger Management, and Black Stallion put on a show in between the features, crushing cars in the infield and catching major airtime. The wheelie competition, monster truck races, and freestyle sessions ensured that no car was safe in the Ohsweken infield as all three monster trucks were on a mission to destroy everything in sight.

YouTube star Tanner Fox also dazzled in his first ever appearance in a monster truck. Fox demolished a number of cars with Black Stallion in the infield after his meet and greet with the Ohsweken Speedway fans at the beginning of the night.

Ohsweken is now set to host the 13th annual Canadian Sprint Car Nationals next weekend September 14-15. The action gets started on Friday night with the Burger Barn Night Before the Nationals, which feature a pair of 15 lap A-Features for the 360 Sprint Cars where the winners will be guaranteed starters in Saturday’s A-Main, plus the Dave McLeod Memorial Shootout, Kevin Ward, Jr. Young Stars Challenge, and the Middleport Mechanical Thunder Stocks, HRW Automotive Mini Stocks, and Gale’s Auto Aftermarket Bombers. Saturday night is the $12,000-to-win and $1,000-to-start Canadian Sprint Car Nationals, plus the Strickland’s GMC Crate Sprint Car Scramble #2.
———————————————————–

Advanced reserved seating tickets are on sale now for the 13th annual Canadian Sprint Car Nationals on September 15-16! Visit www.ohswekenspeedway.ticketforce.com or call 519-717-0023 to order and for more information. For the full 2017 schedule of events, click here.