OHSWEKEN, ONT. – A little experience and a brand new car went a long way for eight-time champion Mike Woodring Friday night at the Ohsweken Speedway. As Empire Super Sprints made it’s first ever visit to the fast speed plant owned and promoted by Glenn Styres, Woodring was a handful of drivers that have made a competitive lap on the 4/10ths mile. Using his knowledge Woodring came out on top of a spirited duel with Tim Kelly to collect the VSM Abrasives Canadian Invasion 25 lap event.

Kelly was looking to make a clean sweep of the night’s activities as he won his heat and the dash but it was Woodring who came from his 13th place start to swap the lead several times among lapped cars before taking control for good on the 18th lap to record his second ESS victory of the 2003 season. The victory thrilled the packed house on hand as Woodring was clear cut favorite with the energetic Canadian sprint car crowd.

“That was a fun race and I’m extremely happy to win here, I just love this place! We finished this new Maxim at two o’clock this afternoon started it up when we got here and now we are in victory lane.” said a happy winner in front of the huge throng. “The track was a little drier than normal tonight but it made for a lot of room to pass and that’s what I needed to get by Timmy (Kelly)”

Kelly shot off from his pole starting spot to lead the early stages comfortably and he too was looking for his second checkered flag on the 20th Anniversary Tour for ESS. While the Rock Stream, N.Y. star was holding his solid lead it was two Mikes making their rapid moves to the front. One was Woodring but the other actually broke through first and that was 11th place starting and current ESS point leader Mike Lutz

Lutz was fifth by the third lap and up to third on lap seven, while Woodring moved into fifth on lap four and fourth on lap eight. These two rivals were looking to make it a three horse race up front until the unexpected happened with nine laps in the books. Just as he was ready to make his moves on Kelly and teammate Jeff VanDusen a large cloud of smoke broke out from under the hood of Lutz’s mount. A rod went through the block ending his bid and also making the ESS point championship fight a lot more interesting.

“I was basically following Mike (Lutz) through the field. He was real fast and if we both got to Tim, it was going to be fun to watch with all the lapped cars also.” noted the Eden, N.Y. star. “But, when he lost his engine then I just had to find a way to get by Tim, once I got by I felt I could hold the lead but he was running the lane that was the fastest.”

Kelly’s mount hugged the lowest portion of the Ohsweken oval while Woodring was slinging his Upstate Kenworth backed #19 on the outside up against the wall. Kelly lead to lap 13, Woodring took his turn on lap 14 and 15, Kelly got the lead back for 16 & 17 before Woodring finally got a good run to make the pass and then used the slower cars as blockers to take control for good.

“I was trying to make sure I got a good enough run past him before I moved down to the bottom.” Woodring mentioned on his plan to take the lead. “I finally got the right spot as I knew the lapped cars would get in his way. Once I got the lead I went to the bottom and the car just got faster. It was a great night for all of us, now I think I’ll get this thing painted tomorrow!”

At the finish of the 25 exciting laps it was Woodring in for his 58th career ESS triumph, Kelly home with a solid night for second, Justin Barger came from 12th to take third followed by VanDusen and John Karklin Jr. Making up the next five were Erin Crocker, the Autotech of Syracuse #20 of Dan Kaszubinski, Lance Yonge, Mike Stelter and Alain Bergeron. Bubby Kerrick’s spin on lap three was the only caution of the event. 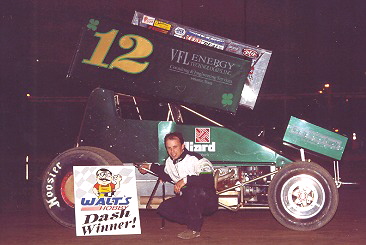 ESS NOTES: 21 sprints made the tow to far western, Ontario; new entries were the track owner himself, Glenn Styres, who lives in a beautiful house just outside turn two, Keith Dempster, Dave MacLeod and Mark Schulz; Styres suffered rear end troubles most of the night and went pit side just before the green flag dropped for the A-Main; Good to see Billy Coffey back and walking the pits. Still very sore but a smile was seen as he made visits to all his fellow ESS competitors; The first ever appearance by ESS was a huge hit with the biggest crowd of the year on hand. ESS and Ohsweken will pair up again for 2004 with some exciting plans to be announced in the off-season; Next up will be a visit to the CVRA circuit with a Friday night stop at Albany-Saratoga and then off to the Devil’s Bowl Speedway in Fair Haven, Vermont on Sunday.