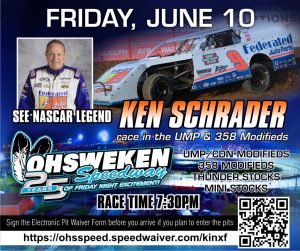 UMP/CDN MODIFIED CHALLENGE
Ohsweken Speedway is located approximately halfway between the two Ontario tracks – Southern Ontario Motor Speedway and Brighton Speedway – with weekly UMP/IMCA-type Modified divisions; this makes it an ideal meeting point for the UMP teams from the west and Canadian Modified teams from the east to square off in a UMP/CDN Modified Challenge. Along with provincial bragging rights, the teams will be trying to keep NASCAR legend Ken Schrader out of the winner’s circle. The Missouri-based driver has claimed victory twice at Ohsweken in the past, while Joel Dick also has two Ohsweken wins on his resume. Tim Richardson and Eugene Hoekstra have one win each, while Dennis Lunger won the most recent UMP/CDN Modified Challenge at Ohsweken in July 2019.

“SMALL BLOCK” 358 MODIFIEDS
The bulk of the area’s 358 Modified teams are based in Niagara Region and Western New York, but many have roots at Ohsweken dating back to the track’s formative days when Sportsman Modifieds competed weekly. St. Catharines driver Mat Williamson first competed at Ohsweken as a teenager and headlines the list of contenders looking to take the Small Block win on Friday; now 32 years of age, the former Super DIRTcar Series Big Block Modified champion and two-time Super DIRT Week winner has already racked up six wins in the region this season. The most recent 358 Modified events at Ohsweken were held in the years 2013 through 2016; Williamson claimed two of those wins, while Western New York drivers Chad Brachmann and Erick Rudolph won one each. The ageless Pete Bicknell’s “Mr. Small Block” nickname holds true at Ohsweken, where he has claimed seven 358 Modified wins to lead the all-time list. Other contenders expected to compete on Friday include 2021 Merrittville champ Mike Bowman, current Merrittville points leader Gary Lindberg, and two-time Ohsweken Sportsman champ Fred Carleton.

NOTE: NEW ELECTRONIC PIT WAIVER
Please click this link to sign the Annual Pit Waiver if you plan on attending in the Pit Area in 2022: https://ohsspeed.speedwaiver.com/kinxf

OHSWEKEN SPEEDWAY ON GFORCETV
Can’t make it to the track or don’t live within driving distance? No problem! Check out all of Ohsweken’s weekly Friday Night Excitement action live online for FREE on GForceTV. Just search for GForceTV on YouTube, OHSWEKENSPEEDWAY on Facebook, or visit www.ohswekenspeedway.com to watch.