18TH RUNNING OF THE CANADIAN SPRINT CAR NATIONALS PRESENTED BY NITRO 54 AND ARROW EXPRESS
Saturday’s event features teams from the Pinty’s Knights of Thunder 360 Sprint Car series, Ohsweken Speedway Kool Kidz-Corr/Pak 360 Sprint Car division, Empire Super Sprints, Patriot Sprint Tour, and Southern Ontario Sprints. The A-Main winner will receive $10,000 and the prestigious title of Canadian Sprint Car Nationals victor, while all A-Main starters will receive a minimum of $1,000, and several special contingency awards are up for grabs. A full Action Sprint Tour fueled by Pinty’s Crate Sprint Car event is also on the Saturday schedule, with the winner set to claim either $5,000 or a brand new crate engine – whichever isn’t claimed on Friday.

Mitch Brown leads the Knights of Thunder standings by just five points over Cory Turner heading into the weekend, while 2019 Strickland’s Crate Sprint Car champion Nick Sheridan is eight points behind Turner. Brown is looking for a third Sprint Car championship to go with his 2015 SOS title and 2016 Ohsweken crown, while Turner recently clinched both the Kool Kidz-Corr/Pak and SOS championships for 2022.

Poirier leads the ESS points standings heading into the weekend, and claimed the Knights of Thunder championship in 2021. Hebing is one of only 20 drivers to lead at least one lap in the CSCN A-Main, and has ten CSCN top ten finishes in 14 previous attempts. Barney and Thomas each have three CSCN top fives on their resumes, while Farnham was the runner-up in his first CSCN A-Main in 2019 after only a handful of 360 Sprint Car starts. Gosselin will be making his second CSCN attempt and claimed his first Knights of Thunder win at Brighton Speedway on Labour Day weekend.

Several drivers will be making their CSCN debuts and contending for the Rookie of the Nationals award this weekend, including Australian-turned-Iowan Lynton Jeffrey, and Kyle Phillips from Grand Island, New York; Phillips narrowly missed taking the SOS championship last weekend.

INAUGURAL CANADIAN CRATE NATIONALS PRESENTED BY NITRO 54
Friday’s event features the Crate Sprint Cars of the Action Sprint Tour fueled by Pinty’s competing for a lucrative purse – the A-Main winner will be given the choice between a $5,000 prize or a brand new crate engine – and several special contingency awards. A full $3,000-to-win Pinty’s Knights of Thunder 360 Sprint Car event is also on the Friday schedule.

Jacob Dykstra leads the Action Sprint Tour standings heading into the weekend, while Lucas Smith will defend home turf as the 2022 Strickland’s Crate Sprint Car division champion. Darren Dryden has four Ohsweken wins under his belt this season, while Smith has three, Mike Bowman has two, and Dykstra and Eric Gledhill have one each. Brett Stratford and Jesse Costa were consistent contenders all year at Ohsweken, and took top five finishes in the points standings; both will be looking for their first wins of the season this weekend.

Several eastern Ontario drivers are sure to factor into the outcome, including Matt Billings, Lee Ladouceur, Jonah Mutton, while Quebec driver Mathieu Bardier has been a consistent AST contender as well. Dale Curran is also likely to be a contender; the Bowmanville, Ontario driver spent part of the season racing in California, and returned to claim his first Crate Sprint Car feature win on Labour Day weekend at Brighton Speedway. 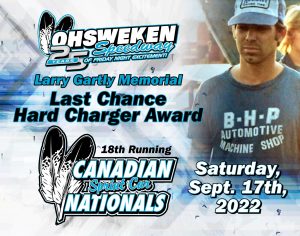 New Electronic Pit Waiver
Please click this link to sign the Annual Pit Waiver if you plan on entering the Pit Area for any reason in 2022: https://ohsspeed.speedwaiver.com/kinxf

Ohsweken Speedway on GForceTV
Can’t make it to the track or don’t live within driving distance? No problem! Check out all of Ohsweken’s weekly Friday Night Excitement action live online for FREE on GForceTV. Just search for GForceTV on YouTube or Facebook, or visit www.ohswekenspeedway.ca to watch.