Note – This article originally appeared in the May 15, 2015 edition of the Ohsweken Speedway souvenir program.

By Tommy Goudge (May 12, 2015) – Our series of interviews for the 2015 season begins with sophomore Crate Sprint Car driver Josh Shantz, who spoke with us during the week before Opening Night. Josh won his first Crate Sprint Car feature on August 22, 2014, and collected 7 top five finishes on his way to finishing 4th in the championship standings. 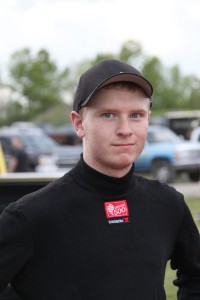 JS: I started racing go-karts with WRKC. Everyone was supportive – my competitor and friend Tyler Turnbull and his dad Collin were awesome, and a huge help all through the karting days to when I won my first championship in 2008. From there I moved on to Mini Stocks where Mark Da Silva was my mentor through the two years of racing in that division. (Mark) was my car builder, and friend that taught me how to get around Flamboro Speedway. From there I moved on to Crate Sprints at Ohsweken.

TG: What do you remember about the first time you saw racing at Ohsweken Speedway

JS: I thought it was awesome. I remember getting chunks of dirt flung at me in turn 1 from the 360’s (Sprint Cars) and thought it was the coolest thing ever – to be going so fast, with all these other cars…I was amazed, and needless to say I was hooked!

JS: A few major races I’d like to compete in would be the Chilli Bowl, Knoxville Nationals, Snowball Derby, and well basically anything, anywhere, and anytime!

JS: That’s a hard question. Tracks and promoters do a pretty awesome job with rules packages and keeping fans coming back…I’d like to see more national type events, racing Friday, Saturday, and Sunday, maybe even a weekday show, or just a bigger schedule.

JS: Well, I know for a fact when my friends come over when I’ve got work to do on my Sprint Car, that they are about to get put to work. They help out, and if you’re involved in the preparation of a race car, who wouldn’t want to see how it performs on Friday night? You just have to bring them out to the track once, and they’ll be hooked…and if they’re not, chances are you need some new friends (laughing)!

JS: I have enjoyed racing multiple drivers. I really like racing guys like Ryan Hunsinger, Aaron Turkey, and Jake Brown – the top drivers in my division. They test you, make you drive harder, and force you to get better, because if you want to win, you have to beat the best.

JS: Never give up. You’re not going to be perfect your first week – or ten – that you’re out there. I know I was told that more times than I could count, but as a driver, you’re always comparing yourself to the best driver in your division. You just keep your head up…improving, learning, and charging towards the front. It takes a lot of seat time!

TG: Who is an autograph you got as a kid that seemed to be a big deal to you at the time

JS: People like Flamboro Late Model driver Nick Roth. I followed him around for a full season trying to learn about race cars before I started at Flamboro. He let me wrench on his car at the shop and the racetrack, and made me feel like part of the team.

JS: If you could choose to race one person you’ve raced against in the past again, who would it be?