By Tommy Goudge (June 1, 2015) – Our series of interviews for the 2015 season continues with Crate Sprint Car driver Ryan Hunsinger. A veteran of many different racing divisions – including 360 Sprint Cars – Ryan returned to Ohsweken Speedway last season and claimed 5 feature wins on his way to winning the inaugural Crate Sprint Car championship. The journey to that 2014 championship was not easy, as Ryan suffered burns in a Can-Am TQ Midget series event at Peterborough Speedway on June 14. 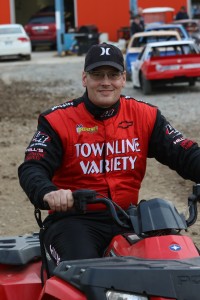 TG: We hear a lot of clichés in the sports world about ‘learning what it takes’ to win, and become a champion. What did you learn about yourself and your team last season?

RH: Getting burned in a race car so bad, and then coming back to race six days later really reaffirmed to me how much I love racing. I had severe third degree burns with nerve damage on my right leg and second degree burns on my left leg. I could hardly walk, and had to be helped in and out of the car. Everyone thought I was crazy to even consider racing so soon after, but my car owner Miles Hill and my team invest so much time and resources into this deal that I owed it to them to suck it up and race. The fact that I had to overcome that really makes me appreciate winning the championship. Last year also showed me how amazing my team is. My guys really have my back, which is something that you can’t put a price on.

TG: What was your first race car, and how did you acquire it?

RH: My first race car was a Chevette Mini Stock. I bought the car for $50 from a guy just outside of Nelles Corners, near Cayuga. I was in high school at the time and had been racing karts since I was 8 or 9. I wanted to race cars so badly, but I had no money. Luckily my dad’s plumbing shop had a welder and stuff, so I taught myself how to weld and fabricate. Trevor Quigley – who is now the Hill’s Racing Team manager – and I built the car, and Steve Lyons – a lifelong friend who I now race against – lettered it. We won with it the first night out.

TG: Which driver(s) do you like to watch at Ohsweken when you’re sitting in the stands?

RH: I don’t get a chance to sit in the stands very often, but when I do I would say my favorite races to watch are the World of Outlaws races. Guys like Donny Schatz, Shane Stewart, and the rest of the top WoO drivers are just so amazing at what they do, and it’s fun to watch them.

TG: If you could change one thing in racing, what would it be?

RH: Racing is very expensive, so if I could change one thing, I would make it more accessible to more people. A perfect example is a guy like Dave Bailey. Dave and I raced together as kids in karts, and he is not only one of the most talented drivers I’ve ever raced with, he’s also one of the smartest setup guys that I know, and I would love to see him in a Sprint Car every week. I really believe in this crate division, and I think that we are on the right track as far as making it accessible to more people, but racing as a whole has a long way to go in that regard.

RH: Have fun with it and don’t take it too seriously. Most of us have dreamt of being race car drivers since we were kids, so regardless of whether you’re racing a bomber or full time in the World of Outlaws, just remember that you’re fulfilling your childhood dreams of being a race car driver – Not many people can say that. Also, good help is very hard to find, so no matter how bad your race day goes, thank your crew guys and treat them decent.

RH: This is probably not the answer you’re looking for, but I really can’t think of anyone specific. There are always going to be people who are happy to see you succeed and people who are happy to see you fail, but that’s just how life works. I try to be a decent person and when I make a mistake on the track I admit to it, apologize, and move on.

RH: When I was a kid growing up I was always with my family around Cayuga Speedway, so I had the opportunity to get some amazing autographs – I would say that my favorite one was Dick Trickle.

RH: This is an easy one – I couldn’t even make up a story like this. In high school we took our little Mini Stock up to Ridgetown Raceway a couple times. We were always really fast, and some of the locals didn’t care much for getting beat, so they were always trying to fight with us and cause problems. I was just a kid, and I probably didn’t handle it as well as I should have either. The one night we needed the police to get out of there safely, and the track promoter – I believe that his name was Ron Urquhart – told me that I was banned for life. A year later, I was racing Street Stocks and enduro races, and we saw an ad for a $2500-to-win race at Ridgetown. My car owner at the time – Danny Brown – really wanted to go, but I said I couldn’t and explained the story. He told me to call the promoter, so I did and asked if I could come, and he said no way, you’re still banned. We then decided that I would race with a disguise and a different name. I went to a costume store and bought a bunch of stick-on facial hair, and we changed the name on the car to Sean Hunt, one of my friend’s names. I dressed up with a big cowboy hat, my stick-on beard and facial hair, and went up there and raced. I remember seeing Mr Urquhart at the pit booth as I was signing in as Sean Hunt. We led a good chunk of the race but ended up getting a flat right rear with 30 or 40 laps to go. After the race I talked to a bunch of people and signed a few autographs as Sean Hunt, and then as we were leaving I looked in the mirror, and the sweat had made my fake beard and facial hair come loose and it was all over my face – I looked like the Geico caveman (laughing).

TG: I’m asking each person to give me a question for the next interview. Dave Bailey asks “What is the significance of the number on your car?”

RH: That’s funny because I was just asking Miles about that awhile back. I thought that the number 7 must have some type of meaning for him, but apparently the first race car that he ever bought as a car owner about ten years ago – a Mini Stock – came with the number 77 on it, and he liked it so he just stuck with it.

RH: Question for Lee Winger – Now that you’ve run a few races in the Sprint Car and done well, are you finding it tougher or easier than you thought it would be?