Note – This article originally appeared in the June 26, 2015 edition of the Ohsweken Speedway souvenir program.

By Tommy Goudge (June 24, 2015) – Our series of interviews for the 2015 season continues with sophomore Thunder Stock driver Chase Hess. Like his father Steve, Chase is a graduate of the Mini Stock division. Chase won the Rookie of the Year award in the Thunder Stock division last season, and finished 7th in the championship standings. 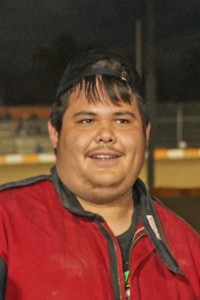 CH: Miles (Hill) was the one who got me started out in racing – otherwise I’d still be a spectator.  My dad has had a lot to do with teaching me how to drive cars, since I started when I was only 14 and had very limited driving experience.

CH: I really enjoy racing with Ryan Beagle – great kid that’ll have a good laugh with you after the race no matter how bad our nights were.

CH: I was only about 6 or 7 years old when I first saw racing at Ohsweken. Ever since then I’ve been hooked, and knew I always wanted to race here.

TG: If you could change one thing in racing (a rule, etc.), what would it be?

CH: I’d like to be able to run the Ford 9 (inch) rear end, and the mud plug rule in Thunder Stock is mind-boggling.

CH: This is such a tough question to answer. I’d like to run the Chilli Bowl and Kings Royal – in my mind those are two of the most prestigious dirt track races to win, aside from the Knoxville Nationals.

CH: Take any opportunity you can to race, regardless of class. It’s the most exhilarating experience ever. I’d rather be a racer for one day than a spectator for life.

CH: Pinball (Mike Giberson) was an autograph that I thought was the coolest – I mean the guy is a local racing legend.

TG: Who do you think is the most underrated driver and/or team at Ohsweken (and why)?

CH: Definitely the Turner boys. They’re always willing to lend a hand to a fellow racer, and they helped (me) so much with the transition from Mini Stock to Thunder Stock.

TG: I’m asking each person to give me a question for the next interview. Jake Brown asks “Who is your biggest idol in life?”

CH: That would easily be my dad – spending the last decade racing against him has provided me with some of my greatest memories.

CH: If you can race against anyone in any class, who would it be and what kind of car would it be in?