By Tommy Goudge (June 1, 2015) – Our series of interviews for the 2015 season continues with veteran Thunder Stock driver Dave Bailey, who spoke with us during the week before Opening Night. A five time champion of Flamboro Speedway’s Mini Stock division, Dave won two Thunder Stock features at Ohsweken in 2014, and finished 5th in the championship standings. 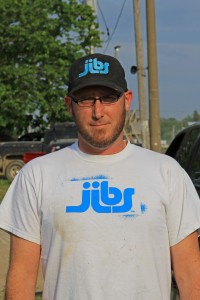 DB: My parents were at Cayuga Speedway for a Friday night show, and I was born Saturday morning – I was pretty much born into it. We followed my uncle, “Cousin” Randy Slack all around to watch him race. As I got older I ran go-karts a bit, and then I was able to help various people as a crew member – uncle Randy when he ran CASCAR, Billy Innes when he ran Street Stocks at Delaware, and Ryan Hunsinger when he ran DIRT Sportsman. I got to work with an ASA team for a year in 2004 with S.S. racing, and did a few races with Jimmy Means’ (NASCAR) Busch Series team in 1998 as a crew member. I just really paid attention and learned from everything.

DB: I remember being at my uncle’s, and John Cowan told us they were building a track behind the gas station, and some cars were out there running around. Me and a buddy went to see and sure enough…I think it may have been a Sprint Car. I remember there were uprooted trees and brush in a pile in the middle and a dirt oval carved around it. I think that was a year or so before it opened. I’m pretty sure the first race I saw there was one I raced in. I raced a #37 Chevette the first year it opened, when the races were Sunday afternoons.

DB: Oswego Speedway Supermodified for sure – Them things are badass!

TG: If someone paid you to design a new racetrack and gave you an unlimited budget, what kind of track would you build?

DB: Probably a dirt track similar to here, but with a roof. This place is nice and wide, and really racy. If you let me, we could build a little asphalt track like Varney on the same property – that place is fun!

DB: You need to be in the right environment for the good stories to come out. I remember in the 90’s helping out at the indoor races in Niagara Falls, New York…After the races Harry Macy would have a banquet room at the Ramada with plenty of pizza and beer. I remember staying up until really early in the morning when most had left but for a few of us young guys, and Harry and his guys. There was a huge age gap, but we would just sit and listen to Harry and those guys talk racing. It was awesome hearing the stories they had to tell. Harry was a cool old man. I want to be a cool old man one day. Someone the younger guys would want to have a beer with. We can tell stories then.

DB: Change costs money. I think at this point – here at Ohsweken – leave it alone. Now that the rules are the same with the stock car classes at the three local tracks, hopefully that will help car counts at the other two tracks. Changing stuff that you think will help the racers rarely works. If you have to buy something twice, it’s not helpful.

DB: I like racing with anyone…I guess I would have to say maybe (Lee) Winger. I helped him out a bit a few years ago when our car was not up to par, and he really got quick. Now he sets the bar in Thunder Stocks. If you can beat him, you did something right.

DB: I’m not sure I would change much with the way I got started. I was able to be hands-on with a bunch of different race cars before I ever raced, so I knew my way around race cars. You need to be open-minded and not treat a Mini Stock as Late Model or whatever – All cars need different things to be happy. A knowledge of racing and some common sense go a long way. Also, don’t be afraid to try stuff that other people say won’t work.

TG: I’m asking each person to give me a question for the next interview. Chris Dickie asks “Where do you see Thunder stocks in the next 5 years? Do you see full tube chassis, late model-style bodies, or fuel injection as part of the division?”

DB: The chassis are headed in that direction now – pretty much just need a stock clip and firewall, and the rest can be built to stock dimensions. As far as bodies, that is a big expense that isn’t necessary. We are getting lots of cars because you can buy a car that has been outdated by rules at another track, and run it competitively here. Some guys want those bodies and other stuff, but I think if you want to run a Late Model, then buy a Late Model – don’t try and re-invent a class that is flourishing. The motor deal – I hope not. You could run a newer motor and just change the intake and carburetor. The motor in my car now is a 305 fuel injected truck motor that has been converted to carbureted. Carbs are so simple to work with and check…I don’t think they will ever stop making them. If you start changing stuff it costs money, and then you lose cars.

DB: Ask them the significance of the number on their car.