By Tommy Goudge (May 18, 2015) – Our series of interviews for the 2015 season continues with 2-time Bomber division champion Dusty DeBoer, who spoke with us during the week before Opening Night. He claimed his 2nd consecutive Bomber title last season with 2 wins, 11 podium finishes, and 15 top five finishes in 15 races. 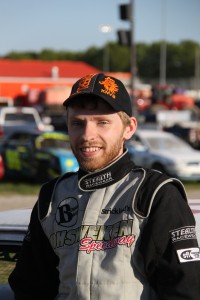 DD: In the first few years Ohsweken Speedway was open, we would go a couple times a year and I remember watching the street stocks when Ben Anger and the McDonald family were on top. I was a big fan of street stocks from day one and never miss one of their races now that I’m at the track every week.

DD: I’d love to have a day of driving a dirt late model to see if I could figure it out. I feel like it would take some time to get the nerve to race around other cars, but the different style of driving has always been intriguing.

DD: The players are always changing but I usually pull for the underdogs – be it the driver that has never won before, the driver who goes for a last lap pass, or the driver who is in the pits and doing everything themselves. Something about an upset winner always feels like a good race to me.

TG: The Bomber division doesn’t always get a lot of attention, but quite a few drivers have moved to other divisions from the Bombers, and won races and even championships. What makes it a good place to learn?

DD: Drivers come into the Bomber class with varying levels of experience, many with none, so the racing is often unpredictable. Because of this, you have to rely on quick reactions more than predictability of others and I think that helps build on-track awareness that you don’t develop as fast on a 6 lane speedway. The faster you can digest all the potential outcomes of what is going on around you, and the moves you are making, the more efficient you can be with the move you make…and in a handicapping lineup, efficiency gets a fast car to the checkers first.

DD: I always liked racing against Max Chechalk. We started around the same time and improved on a similar trajectory, so we ran around each other quite a bit. I could count on him not putting me in a bad spot and not over driving a corner when we were side-by-side. It was always a challenge to get through traffic as quick as he could, and – to me – him winning a race starting shotgun (16th) last year was the most impressive drive in any class on the season.

DD: I had very little driving experience on the road and none on a track when I started, so naturally I assumed I would win every race I entered. The best advice I would have is that you have to walk before you run. It takes time to learn the limits of the car. You are going to make mistakes, and the biggest thing early on is to realize why they happen, and figure out how not to make them again. Also treat your Dad and brothers well, because they always have the best ideas on how to fix things you break.

DD: We went to CASCAR races at Cayuga Speedway when I was a kid, and they would have autograph sessions before the race. I always liked getting the autograph card from Dave Whitlock because his car was decaled just like Dale Jarrett’s Ford Quality Care NASCAR car. Painting a car like a NASCAR car appealed to me, and anyone with a Ford emblem on their car had to be a good guy.

TG: If someone paid you $5 million to design a new racetrack and gave you an unlimited budget, what kind of track would you build?

DD: It seems like a lot of local pavement tracks are struggling, so I would try to help that out. I’d go with around a 3/10 mile track with wide banked corners like Ohsweken…maybe a little slower so it wouldn’t be all about making power. Then I would keep the stock in Mini Stock and Street Stock to keep spending down, and pay off Ohsweken to sell some of their drivers on coming to my track.

DD: I don’t know too many in the pits on a personal level, but just looking from the outside I think the Mike Giberson approach is a great thing to aspire to. I’ve never seen him get worked up or complain. He just does his race and accepts whatever happens, then becomes a fan in the stands. I really hope by the time I have kids old enough to be in the pits that the “Pinball” is still rolling.

TG: I’m asking each person to give me a question for the next interview – Josh Shantz asks “If you could choose to race one person you’ve raced against in the past again, who would it be?”

DD: I look forward to racing on the same track as my brothers again. In 2013 – racing with Tim – any time I would see him ahead of me, I’d be pulling for him to pass the next car. It was like being in the grandstands and being in the race rolled into one.

DD: If you had to sit out a race for some reason and needed one of the Ohsweken Speedway competitors to drive your car, who would you draft into your seat?