By Tommy Goudge (May 12, 2015) – Our series of interviews for the 2015 season also begins with veteran Thunder Stock driver Chris Dickie, who spoke with us during the week before Opening Night. Chris bagged a feature win on August 8 last season, and collected 7 top five finishes on his way to finishing 4th in the 2014 championship standings. 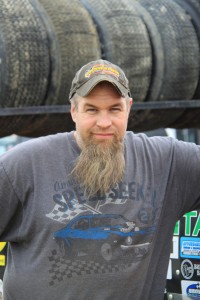 CD: I always had an interest in racing. My Dad would take me to Flamboro Speedway and the old Paris Fairgrounds speedway when I was a kid. My Dad and I built my first car to race at Flamboro Speedway in the Street Stock division. Jim Echlin helped us a lot when we were starting out.

CD: I would love to get behind the wheel of a NASCAR Truck on the dirt at Eldora!

TG: One of the hallmarks of your career has been consistency. It’s rare to see you outside the top 10 at the end of a feature race. Why do you think you’ve been able to maintain that type of performance, even with increased competition each year?

CD: My team should take all the credit for consistency. It starts in the fall with my Mom taking care of sponsorship details. She does great.  Without our sponsors we couldn’t buy the parts to keep us competitive. From there it’s the crew – these guys and girls never miss a thing. We never have breakdowns because of their meticulous prep every week.

CD: That’s a tough one, but I would have to say Jim Lampman. We always seem to end up side-by-side for several laps. We seem to run each other as hard as we can, but somehow never trade much paint.

CD: The biggest piece of advice I could give to somebody new to the sport is to remember it’s only a hobby. You need to go to work Monday morning, so invest well in safety equipment and make sure it’s installed properly. Also…family first. Don’t skip the kids’ hockey game or a family get-together to go hang out at the race shop.

TG: Who would you point out to your kids as a good role model in the Ohsweken pit area?

CD: There are a few names that come to mind. Ryan and Kevin Beagle are a couple – a father/son team who show up without a big crew. They build their own cars and engines. They are there every week because of hard work and late nights, and they are faster every season. Also Lucas (Lubin) and Jamie (Eggerland) from the #29 (Mini Stock) team. It doesn’t matter how busy they are, they always take time with my boys to talk to them and make them feel part of their team too. Jamie runs his own business, and those guys also see many late nights in the shop to get there each week!

CD: I used to clash with Mike Thorne quite a bit. Mike’s dad Dave still tells me I cost Mike his first win by running him to the wall (laughing). Anyway, we get along great now – I get along fine with anyone who randomly stops at my house and brings beer with them like he does!

CD: I once got Harry Gant’s autograph at Michigan International Speedway. He decided to work the Skoal souvenir trailer that day.

TG: When you’re hanging around with other racers and tell old racing stories, what’s one of your favorites to tell (either something that happened to yourself or someone else)?

CD: One of my favorite racing stories – although embarrassing – happened to me. I drilled the wall exiting turn two on the first lap of the first heat race of a new season. It was not a mechanical failure or racing incident…I didn’t get my quick-release locked into place, and the steering wheel came off between turn one and two. Now I check it constantly (laughing).

CD: Question for Lee Winger – Where do you see Thunder Stocks in the next 5 years? Do you see things like full tube chassis, late model style bodies, and fuel injection as part of the division?